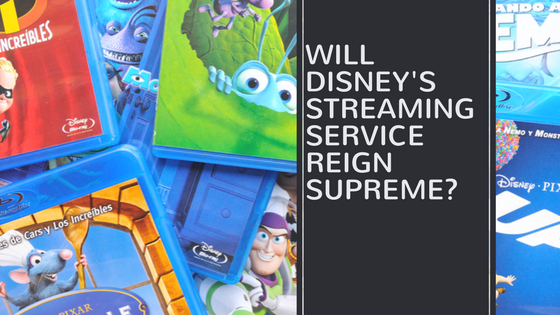 During The Walt Disney Company’s quarterly earnings call on November 9th, 2017, CEO Bob Iger casually dropped some big news about their next steps. The company just closed a deal with writer Rian Johnson to create a new trilogy of movies in the Star Wars universe. This gives LucasFilm the long-term pact with a single director that has been missing since George Lucas handed over the reigns in 2012.

However, the bigger announcement that followed was that Disney is developing a series of original television shows for its upcoming video streaming service. These include a live-action Star Wars television series, a new Marvel show, and programs based on High School Musical and Pixar’s Monsters, Inc. franchise.

The focus of this announcement is the content. Let’s take a look back at Netflix in comparison to what Disney is looking to accomplish in the next two years.

Netflix back in 2011 focused on library titles for their streaming content. Licensing deals with multiple studios and cable channels like Starz gave Netflix a wide selection of firms and TV shows that made it seem like an unparalleled bargain for consumers.

But with competitors like Amazon and Hulu joining the game years later, it was apparent that content was going to be the name of the game and the differentiator between which providers would get purchased from consumers.

Audiences typically care about where they can get their content not necessarily the brand name of the provider. Customers will gravitate towards whatever service is providing the programming leading to exclusivity deals for providers.

This is apparent on several occasions where customers will pay for certain subscriptions exclusive to those platforms. Examples includes Stranger Things on Netflix, The Handmaid’s Tale on Hulu, and Transparent on Amazon to name a few.

Now back to present day with Disney who is trying to do the same thing with their original content and also partnerships they are trying to acquire like the recently announced deal to buy Fox TV for $52.4 billion and movie assets.

First off, since Iger took over in 2005, the company has built its movie-business dominance on the power of billion-dollar acquisitions. First with Pixar in 2006, then Marvel in 2009, and then Lucasfilm in 2012.

This is why Netflix’s stock dropped back in August 2017. Disney announced it would be ending a 2012 deal that brought all of the studio’s films exclusively to Netflix. Netflix says they are focusing on more original content and specifically targeted library programming for 2018 to make up for these losses.

Netflix also mentioned that it’s hoping to make original content half of its catalog by the end of 2018, and they will spend $8 billion to hit that goal.

Considering Netflix reported in April of 2017 that it’s total subscriber base is just shy of 99 million users, I think it’s safe to say the increase to customer subscriptions in January 2018 will help reach that new content goal by having the extra money to spend.

If this acquisition goes through, Disney has made clear its intention to go head-to-head with Netflix, yanking its movies and TV shows from the streaming giant in 2019 and launching that content on its own service.

Once it owns Fox franchises they would receive movies like Avatar and TV series such as Family Guy. Some shows produced

by 20th Century Fox TV are due to be acquired by Disney should the deal go through —  some have already begun to leave Netflix as their agreements with the service have expired. A few of these shows like How I met Your Mother have made their way to Hulu, which as part of the Fox deal will see Disney become a majority owner.

Disney’s CEO in a recent interview confirmed his plan to keep content for its streaming platform, both what it currently owns and what it hopes to acquire from Fox.

CEO Bob Iger reported We’re going to be looking at more direct-to-consumer opportunities for our company. And if that requires us to wean the businesses of their relationships (Fox) with other distributors then that’s what we’ll do. Just as we did with Netflix.

The question becomes how will companies like Comcast, Charter, Netflix, Amazon compete with this type of content overload that Disney will retain, gain, and create on their own? What will the price points look like? Will Comcast and Charter try to make a deal and get that content put on their TV programming options for consumers to buy?