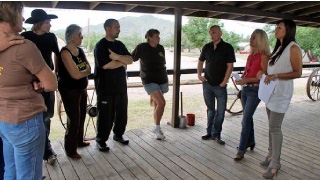 This week’s show featured the historic Triangle T Ranch, situated on 132 acres near Dragoon Arizona. This episode could be a classic case study for what happens when an entrepreneur buys a hotel without thinking through their idea.

To set the stage, the 11 unit guest hotel was purchased sight unseen by the owner Linda. Built in 1922, the ranch was once on the “A” list of the rich, famous and powerful with visitors such as the Rockefellers’ and movie stars like Steve McQueen. It had also been used as a movie backdrop for a Glenn Ford western in the 1950’s.

However, since the arrival of the new owner, the Triangle T Ranch had fallen on hard times and host Anthony Melchiorri was brought in to find out why. The show started with Anthony’s arrival to the property and a subsequent, frustrating 30 minute excursion to locate the main office that ended up being at the back of the property.

Before finding the main office, the host was able to stop at several of the hotel’s features such as the Saloon and the abandoned welcome center. As expected, the condition of the property was not good. I would have to imagine that if it wasn’t for the arid condition of Arizona, the property would have been completely dilapidated.

After the main office was found, Anthony met with the owner Linda and almost immediately recognized that she was the reason for the problems. This is consistent with a trend from last season, where hotel management, a lack of hotel maintenance programs and poor marketing were identified as the top three issues for the hotels that were featured on the show.

As mention above, the situation as the Triangle T Ranch indicated that the owner had not really thought through her purchase and that she lacked the experience and skills to fix problems. Some of issues that Anthony uncovered by talking to Linda and in his tour of the property included but was not limited to:

“Never hire just to have a warm body”

The only real bright side was that the guest room Anthony inspected was in relatively good shape and only needed minor improvements such as a new bedspread and a little renovation. Given Anthony’s passion for a clean hotel room this was pretty good.

Getting the Triangle T Ranch headed in the right direction required a marketing change, some maintenance items taken care of and a few renovations. The most significant of these changes included:

When it was all said and done, I could not help but wonder if the changes will last. One of the keys to being a successful entrepreneur is the ability to think through ideas and planning. The owner bought the ranch sight unseen and had no clue as to what her assets were at the time or how she was going to use them.

Anthony’s visit showed her the types of things that needed to be done but the skills to continue planning and execution of action plans were not apparent. It will be interesting to see what becomes of the Triangle T Ranch in a few months’ time.