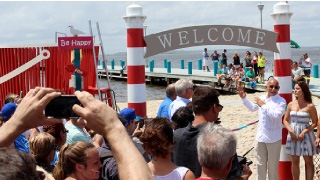 One year after Hurricane Sandy, the storm’s aftermath can still be seen today along the shores of New Jersey. This week’s episode of Hotel Impossible visited Seaside Heights, New Jersey in the hope the show could assist several hotels in the area. The lessons to be learned included why using hotel inspection checklist for storms is critical and how to work as a community to rebuild.

When Hurricane Sandy came ashore on October 29, 2012, many people were caught off guard by its size. It was not the strongest of hurricanes (only a category 1) but it was large and was interacting with a winter storm bearing in from the west. The storm’s impact was felt in 24 states and included massive flooding and fires as the result of a huge storm surge.

For coastal communities such as Seaside Heights, situated on a barrier just east of Toms River, the flooding and high winds decimated the boardwalk and businesses. Many establishments were either completely wiped out or found their hotel properties under several feet of water.

The show for Seaside Heights was divided into two episodes; the first episode was about a failed attempt to help the Thunderbird Motel and rebuild a public beach area. The second week focused on helping 3 other hotel’s in the area that were selected after the fiasco at the Thunderbird Motel.

Recapping the first episode is easy. The owners of the Thunderbird Motel came across as abusive, arrogant, uncooperative and very deceitful. Starting with the first room inspection that pointed out a huge deficiency in maintenance and housekeeping management, the owners immediately went into attack mode, clearly only expecting free help without accepting any responsibility or criticism.

The host, Anthony Melchiorri’s decision to walk away should have been done sooner. With so many good people needing help, it was a shame to waste energy or resources on what is probably the most undeserving family in the show’s 3 year history.

The other part of the first episode was the discovery of a local community beach used by families that had seen its ocean fence washed away and much the beach area covered with debris and ruined playground equipment. Anthony brought in one of his designers and another reality TV show host to rebuild the beach area.

The second episode saw the Hotel Impossible team shift gears and try to help 3 other hotels in the days that were remaining. They choose to assist the Charlroy Motel, Palm Villa Suites and the Tradewinds Motor Lodge. The areas of need for each were identified as:

Throughout the show, the hotel was able to obtain help from other TV shows, volunteers and the community itself. With so many project being done at once it is a shame that not everything could be fixed up.

The Fixes for Seaside Heights and What Hoteliers Should Learn

The fixes for the Charlroy Motel and the Palm Villa Suites were the renovations. The Tradewinds Motor Lodge received a new computer, reservation system and a truckload of hotel supplies. The beach area was completed and returned to the people of Seaside Heights.

Lessons Learned from the Seaside Heights

The second lesson is that it is important that the people in a community help each other when disaster strikes. Without the volunteers, the projects that the Hotel Impossible team took would not have been completed.

The third and final lesson can be learned from the Thunderbird Motel. If you want people to help you, don’t lie. No one likes being deceived, the fact that the owner was sitting on $40 million in assets but claiming his retirement (the hotel) was in jeopardy to obtain freebies was more than just a little pathetic.

I tip my hat to the staff of Hotel Impossible for getting involved with a community that needed help. I was happy to see that the three hotels mentioned above all received their needed renovations.