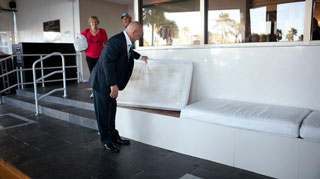 The Ocean Manor Resort in Fort Lauderdale, FL certainly had its challenges for Hotel Impossible host Anthony Melchiorri. You did not need to be a hotelier to know right off the bat the problem was poor hotel management.

The problems started upon his arrival with terrible customer service by the valet and continued to build as a quick inspection of the premises revealed a hotel plagued by filth and lack of basic hotel maintenance.

In almost every instance, the problem was created or magnified by either untrained or unprofessional staff, all of which were being mismanaged by the owner and seemingly incompetent general manager. Special note!- the new general manager, Mike, did an amazing personal turnaround to finally take charge of operations.

Getting back to the show, the following list of staff and maintenance issues will give readers some idea of the type of turnaround needed. They include:

If you watched the show you would realize that although their maintenance, technology and renovation issues are the same as many other hotels, the management staff was responsible because they were operating in defeat.

The new general manager blamed the owner while the other management staff seemed to have no clue or didn’t really care. Anthony called it correctly during the show when he told the owner to butt out and told the general manager to step up to the plate and start managing and stop whining.

As the show progressed, Mike, the new general manager finally took control, managers were given clear directives, and it appeared that employee attitudes took a positive step forward.

Maintenance was put back on track by limiting the number of people who could direct the maintenance chief to perform work. The hotel was shown how they could renovate their rooms for approximately 40% of what they were spending.

The housekeeping manger made a commitment to personally perform inspections on every room at least once a year. By the end of the show the newly renovated rooms were beautiful and the hotel appeared to be much cleaner. However, there was no word on whether or not the valet staff had been replaced.

One key point that Anthony made during the show was that the vast majority of guests make their reservations based upon online reviews. Bad reviews about filthy rooms will kill a hotel’s prospects.

Many of the assets on the list above could be maintained better using Computerized Maintenance Management Software(CMMS). One of the key features of any good CMMS is the ability to schedule inspections on various assets and record the results.

Using a hotel CMMS, hotel management and maintenance teams could identify cracks, leaks, mold and other maintenance issues as they developed. Then using another feature of CMMS they could schedule the appropriate maintenance, repairs and replacements.

Hotels are a service business. Their success is highly dependent on the guest experience. Hotel guests have demonstrated over and over that room cleanliness and smells are their top concerns. All the online hotel marketing and room revenue theories in the world are useless if the hotel is not maintained properly.