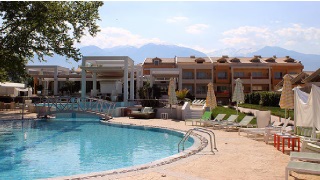 There was something new on Hotel Impossible this week. The show ventured to Greece to visit the Litohoro Olympus Resort Villas and Spa, a 4-Star hotel suffering from the Greek financial crisis. The lessons to be learned this week apply to GMs and senior staff for every major chain hotel and/or high rated establishment.

To set the stage, this week’s episode was staged in a modern (built in 2010) hotel on the footsteps of Mount Olympus. The hotel featured beautiful rooms, breath taking views and private pools. Unfortunately, the hotel also had a very low occupancy rate.

Episode Recap: Afraid to Get Dirty

After thinking about this for a while, the situation was a little like last week’s episode featuring the Abacrombie Inn. In that episode, it was clear that the owners had lost their entrepreneurial passion. The result last week was a lack of desire to get involved and get dirty.

This week, the owners, Platon, his mother Evenia, wanted to do better but in my opinion did not like the idea of getting their hands dirty. Although the owners were well intentioned, simply wanting to do better or working a lot of hours does not mean that the passion to strive for excellence is there.

This was very evident in one particular scene when the host Anthony Melchiorri attempted to get the owners and spa manager to touch a completely clogged spa air filter. Their reaction was almost hysterical at the thought of touching dirt and grime. In fact, the Spa manager (also Platon’s wife) actually backed up with a fearful expression as to say I am not going to get dirty.

A willingness to get dirty was just one issue, the other real issues included maintenance, the use of online marketing, space management and staff training. Of these hotel maintenance was very much the hot item.

Through the course of the show several other opportunities for improvement were identified, these included:

The incident mentioned earlier with the spa filter was important because every hotel owner, GM and manager should be willing to do whatever is necessary in the best interest of the hotel. Whether it is picking up a paper clip off the floor or using a cleaning tool, no task should be considered beneath them.

It is the little things that distinguish the impassioned hotel manager from the average employee. Passion can be infectious. If hotel management displays passion so will hotel employees. The end result is a cleaner, better run hotel with more satisfied guest.

If hoteliers learn anything from this episode it should be to identify people within the organization that are afraid to get their hands dirty and ummm, ummmm, get rid of them.

Other fixes for the Litohoro Olympus Resort Villas and Spa followed the normal format. A designer (Blanche) was brought into remodel the villas so that they could be used as an alternative to the closed spa. The end result was a beautiful designed room and patio area. Have to give Blanche credit for this one.

Is all this working? The final screen indicated revenues are up 30%, the Spa HVAC unit has been repaired and the Spa is open again. Now it is up to the owners to ensure they execute the plan and maintain the hotel properly.