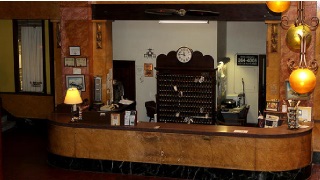 Something old, something new and something terribly wrong is the best way describe the Gadsden Hotel episode of Hotel Impossible. This episode about a historic hotel just north of the Mexico border reinforces the concept of owner involvement and the value of hotel management experience. Unfortunately, in my opinion, the episode also had a terrible ending.

Setting the stage, the Gadsden Hotel, built in 1907 is a 130 room hotel with an absolutely stunning lobby and long history of famous visitors. One of the largest hotels in the city, it had sadly seen multiple years of red ink to the tune of about 200k per year.

The situation was compounded by the fact that the owner was ill and the hotel was now in the hands of a guardian tasked with saving the hotel. The GM, Robin, was the daughter-in-law of the owner and had been there for 25 years. The show mentioned that she was the person who called for Anthony’s help (remember this part).

Episode Recap: No Experience, No Hotel Systems, No Common Sense?

As with many of the previous episodes, the problems in this hotel started at the top with the owner and GM. The GM admitted that she had no experience when she took over operations decades ago. How involved the owner was before his illness was not disclosed but the results included:

Compared to the other hotels that Anthony has visited in prior shows, the Gadsden Hotel appeared to be in pretty good shape. The only exception was a fire system that was not working making the hotel a major safety and liability issue. The fire alarms had been turned off years ago, the extinguishers were past their expiration dates and there was no evacuation plan.

The GM’s real problem, in my opinion, is that she did not learn and did not seem to have enough common sense to open the fire system box and turn to flip the switch to “ON”. This placed the hotel and guests at great risk.

Throughout the show, the GM was presented as incompetent as well as emotionally fragile. Although the fire system fiasco was a major mistake she did however manage to keep the hotel in pretty good shape.

In keeping with the show’s format, Anthony made several changes and suggestions for the hotel to continue. Among these were:

In this review I mentioned something old, something new and something terrible. The old was the impact of a lack of experience, the new was not knowing how to check and turn on the fire system. The terrible is what happened to the GM according to the final screenshot on the TV.

The final screenshot from the show indicated that Robin was let go soon after Anthony left. I think this was a terrible mistake as her lack of experience was critical but should not have been fatal. Her abilities were limited and I am in agreement that she needed to be removed from the role of GM.

On the other hand, she was the person that called for help. As a general rule of thumb, you do not shoot the people who ask for help, you find their talents and find a place for them in the hotel where they can contribute. As Anthony stated, Robin was the face of the hotel and her knowledge of its history could have been a valuable marketing asset.

What can we learn in a nutshell? Hotel owners and executives have to be actively involved to manage the properties and the people assigned to them. Finally, think before you dismiss an employee for being incompetent. Firing someone who asks for help sends a horrible and I mean truly horrific message to all other employees.