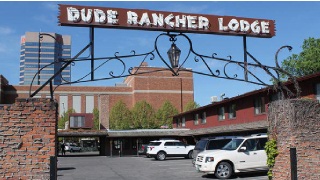 Not every problem stopping a hotel from success is related to hotel maintenance, sometimes hotel management just needs to change with the times. Last week’s episode of Hotel Impossible featuring the Dude Rancher Lodge was a perfect example of this.

A 52 room hotel located in Billings Montana, the hotel had seen the competition increase dramatically over the last few years and was not able to compete. This was unfortunate as the hotel had been listed in the National Registry of Historic Places due to its age and ranch house theme.

Complicating matters was that the hotel had been incorrectly listed as a one-star hotel which in the minds of travelers is associated with dirt, broken down, cockroach infested hostels. Given that 50% of their business was through one website that listed them incorrectly, the hotel was on the verge of closing.

A quick tour of the lodge by host Anthony Melchiorri revealed a charming lodge with distinctive carpeting that reflected a history of rancher brands as well as other decor reflective of the old west. The lodge also appeared to very clean with out the usual housekeeping issues seen in earlier episodes.

On the other hand, the tour also identified several areas stuck in the 1970’s that needed renovation such as the front lobby desk and room bathrooms. A visit to the hotel’s guest rooms also suggested that the rooms themselves could use a little sprucing up to reflect the heritage of the hotel.

The real problems were discovered in interviews with key hotel staff that uncovered:

Compared to other hotels featured in the show which usually had a multitude of maintenance issues, the fix for the Dude Rancher was giving the key staff the training and tools they needed to step up to the plate.

Some of the changes and results were: