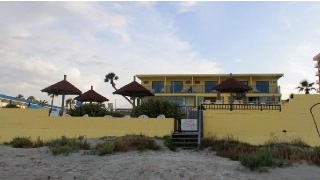 Why would a small, family run hotel on one of the most popular beaches in America be in so much trouble? This season’ final episode of Hotel Impossible visits the Dream Inn, a small hotel located on Daytona Beach, FL, that once thrived but has fallen on hard times and tries to find out what went wrong.

The show started as usual with host Anthony Melchiorri arriving to find the horrifically ugly yellow hotel with a one-star signage surrounded by dead vegetation and bird feces covered dolphins statues. Upon entering he encountered one of the owners and acting general manager operating the front desk because they had no money to hire anyone.

The owner/general manager looked as if he was about to cry during most of the episode and this was indicative of the severe hotel management problems uncovered later which included the GM not liking to talk to guests and the matriarch owner micro-managing the hotel as well as all decisions despite being in poor health.

The show progressed with the customary tour of the premises and meetings with staff where it quickly became apparent that the hotel was falling apart due to a lack of hotel maintenance, a lack of good housekeeping and poor management. Some of the notable items uncovered included:

15 Signs of a Dilapidated hotel

Talks with the staff revealed that the top two customer hotel complaints were the color of the hotel and the GM’s personality. They also revealed that it was The GM’s mother who actually made all the decisions in the hotel preventing him from doing his job.

At the conclusion of the tour, Anthony met with the owner/general manager and discovered he strongly disliked talking to people. This prompted Anthony to mention the following two rules for their hotel management.

“Be nice to people and clean the damn rooms”

Clearly hotel maintenance and housekeeping was not being done. It was very evident that change would not occur without a management change.

As it has been in several of the shows, getting the Dream Inn on the right track starts at the top. Throughout the show Anthony worked with hotel management to define their roles as well as give them the tools they needed to do their job.

In defining their roles he appeared to get the hotel matriarch to take a back seat and let her son manage the hotel. The hotelalso hired a friendly hired a front desk person giving the GM more time to manage the property.

Although early in the show it was identified that the housekeeper was not able to clean all the rooms by herself there was no indication that another housekeeper was hired. However, the hotel did receive new linens for each room from a company seeking to be associated with Hotel Impossible. Expect more of this in season two.

Lastly, the physical appearance of the hotel was renovated. The ugly yellow was repainted a light blue, a professional carpet cleaning company was brought into deep clean the carpets and the lobby was redecorated. In addition, exterior assets were cleaned up, rooms were cleaned and the pool area was repainted/redesigned with new furniture that included cabanas and new lounge chairs.

The cosmetic changes did the trick short-term as the show reported that the hotel was soon listed in the top 25 hotels and it hired a company to do the dishes for guests.