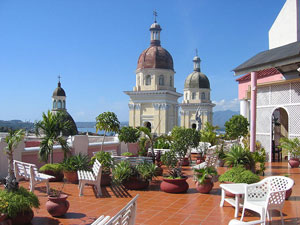 Last night’s episode of Hotel Impossible featuring the Casa Verde Hotel in Puerto Rico was really a story of a hotel owner trying to find his own identity. Owner of a successful bar but failing hotel, the owner had to find himself before he could chart the future of the hotel.

Episode Recap: No Place for a Family

As I reflect upon the episode, I am reminded how much easier it is to turnaround operations when the key player is intelligent, perceptive and passionate about changing for the better. It also helps when you already have experienced staff that knows what to do and only need some leadership and a few hotel system tools to perform better.

To properly set the stage, the 2 building, 19 room hotel on a surfer’s beach was home to the Rock Bottom bar, one the area’s most popular bars. The bar was the primary money maker for the hotel. Unfortunately, the young crowd that partied all night was often loud and out of control.

The noise was so loud that hotel and bar staff would tell families to stay someplace else if they wanted a peaceful vacation. In fact, a sound test by the host Anthony Melchiorri, register a loudness level of 87 decibels (louder than Times-Square in NYC). The net result was that the hotel was not able to attract guests.

The situation had been allowed to progress to this point because the owner (Billy) was a self-admitted alcoholic just a few months earlier. His former zest for partying led to the extension of bar hours and the alienation of guests.

In an effort to get his life back on track and provide a stable environment for his family (wife and 3 daughters), Billy stopped drinking and was trying to distance himself from the bar. Unfortunately, care of the hotel started to suffer also.

The customary inspection of the hotel premises and rooms led to the discovery of several problems. The main cause of these issues seemed to be a lack of management staff. The hotel was operating without a GM or manager. Billy was trying to do too much and the staff often wore multiple departmental hats leaving them ineffective in their assigned roles.

The main problems centered on the condition of the rooms. Examples included:

Other problems included poor signage indicating where guest should go to check-in and a poorly maintained parking lot. All of these issues were relatively easy fixes and Anthony did a fine job of recognizing that the actual hotel problems of dirty rooms and
maintenance were secondary issues.

One of the reasons the fixes for the rooms would be easy was that the head of housekeeping was already doing inspections of rooms creating a list of items that needed to be addressed. However, her dual role as being a front desk person hindered her ability to follow up.

Anthony was able to help transition Billy from a bar owner into a hotel owner. He did this by having Billy and his family recognize that the bar either had to close or change its theme. Since the bar was the cash machine for the hotel it was decided to renovate the bar and change its operating hours.

The renovation included adding sound proofing paint and higher quality furnishings. The bar stated closing at midnight although in the final trailer it stated the bar was now closing at 10 PM.

Other changes included room renovations that could easily be duplicated and the bringing in of a hotel operations expert to teach Billy the ins and out of hotel operations.

For me, the most important part of the fix was the willingness of the owner to change and the reasons he wanted to change. Every hotel has staff or managers that have personal problems. Sometimes these problems cloud judgment and lead to serious mistakes. This is life.

However, I would put an intelligent, driven, positive recovering alcoholic on my turnaround team any day over someone who hides their problems and is unable to see their shortfalls. The point being, we all make mistakes, those that are willing to learn from their mistakes will always have greater value to an organization.