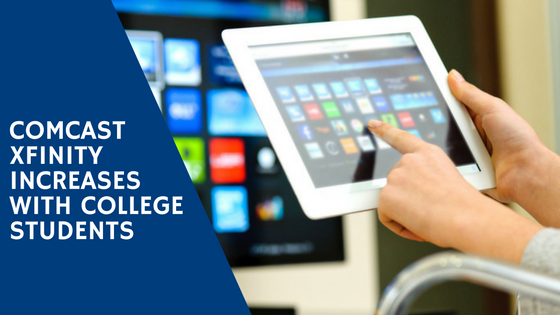 Comcast’s Xfinity on Campus is now available at more than 60 colleges and universities, but its corresponding Xfinity Stream TV offering for non-students isn’t taking off quite as well.

The Xfinity on Campus service is unlike traditional cable TV in that consumers access it on computers, tablets and smartphones with an Internet connection rather through a TV set-top.

Comcast is able to stream its video service over a managed IP connection, but that’s an academic distinction for consumers in many situations.

The major difference for end users is that the service doesn’t count toward Internet data caps, and because of content licensing rights, TV shows aren’t automatically available once a student leaves campus. Some content is accessible beyond school boundaries through Comcast’s TV Everywhere apps.

Comcast has doubled its Xfinity on Campus deployments since 2015, and they have added a cloud DVR feature to the service at no extra cost. They are also making it easier to switch between Xfinity on Campus while at school and TV Everywhere content while off campus.

Taking Xfinity from Campus to Home

Xfinity on Campus led to the development of Xfinity Stream which was introduced back in 2015, but with it only being available in select areas in Massachusetts, New Hampshire, and the Greater Chicago area it hasn’t been able generate the revenue expected; it is scheduled to launch in Boston and Seattle though later this year.

The downside to Xfinity Stream is it’s a low-cost product…good for consumers not so much for the service provider.

The service is only $15/month for access to a select bundle of channels including major broadcast networks like PBS, Telemundo, Univision, and HBO; the price also includes the DVR cloud service.

Comcast views Stream as an entry-level service hoping to upsell their customers to the full cable package; the downside would be if customers are content with the lower-rate package and not see the need to upgrade causing Stream to not necessarily be a revenue boost for them and almost an achilles heel.

The beauty of Xfinity on Campus is that it attracts the younger generation to get accustomed to the content and service at the low-rate and then have them upgrade to a cable-TV package once they graduate from college. It allows Comcast to push consumers toward a more expensive product later, and also get them familiarized with Comcast and not want to switch providers.

The Younger Generation in Mind

As mentioned, Xfinity on Campus gives the younger generation a taste of Comcast services allowing them to choose an upgraded package once they graduate.

Comcast has the younger viewer in mind. Online streaming is where millennials reside watching content on their phones, iPads, computers, and not so much on a traditional TV.

According to Deloitte’s Digital Democracy Survey, about three-quarters of millennials stream TV shows or movies on devices at least once a month. That’s one of the reasons Comcast launched Xfinity on Campus was to give students the flexibility to watch content where and how they wanted knowing that their services could then be considered later once they graduated. Good experiences and low prices keep customers from switching providers.

It goes back to delivering what the customer wants and what they’re demanding. Streaming, on-demand services, flexibility, fast speeds, and low-prices all fall into categories of the younger mind. If the customer remains happy for four years in college, it will be a smoother transition to upgrade them than if they had never experienced your product at all.