How Many Engineers Does it Take to Change a Lightbulb? 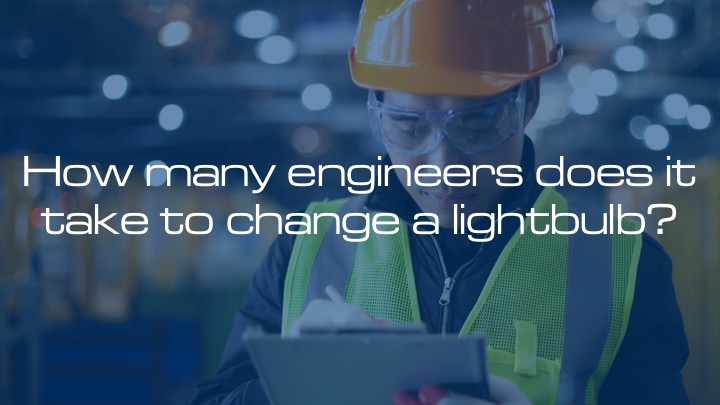 The question is silly yes, but it could help determine if your facility is spending too many man hours on an asset that doesn’t need to be attended to as often as it could be in turn saving your facility on labor costs year over year.

Lighting plays a crucial rule in any organization, in fact, lighting can consume 38 percent of a building’s total electricity draw — approximately the same as space heating, cooling, ventilation, office equipment, and computers combined.

Facility owners debate if LED lighting is worth the cost over fluorescents or incandescent lighting for their organizations; the question then becomes: how much could you save in labor costs by switching to LEDs?

LED lighting can reduce electric costs in your facility by 20% to 50% or more depending on which current light sources are being replaced.

The life of a LED replacement lamp or module in dedicated fixtures can also extend a much longer life span than incandescent or halogen, but marginally longer than some T8 fluorescent tubes.

Since the lifespan of LEDs last longer than alternative light sources, they don’t require replacing as often as conventional light bulbs.

The average lifespan of one LED bulb is about 50 kW hours or 50,000 hours where a conventional incandescent bulb lasts about 1,000 hours. So, you will change a conventional bulb 50-labor consuming times before you change a LED once.

There are a few variables that can affect labor savings as well when using LEDs. Facility managers should consider the distance maintenance personnel must travel to retrieve the bulb, transportation method, height/accessibility of the bulb, and other factors contributing to labor hours.

Here’s an example on how much a facility could save:

Facilities can also save on ballast installation which is for the fluorescent tubes; there is a labor cost associated with the installation of replacement ballasts which is avoided when upgrading to LEDs.

We’ve discussed the basics on how you can save with your labor costs; now let’s take a look at the maintenance side dealing with LEDs.

Maintenance expenses in the lighting world manifest themselves in three primary ways:

If you take the example above, the total cost savings realized when upgrading 200 fluorescent tubes to LED is over $15,000 over the life of the LED bulbs.

In many situations, the substantial maintenance savings can nearly double the overall project savings. LED is smart business when it comes to return on your investment.

LEDs, like any other asset, are also best paired with an EAM CMMS allowing technicians to still keep record of all maintenance done on the bulbs to show proper cost savings and retrieve asset history to show LEDs are the smart move in lighting.

The hospitality industry is just one of many industries/businesses that could save on labor and maintenance cost by switching to LEDs.

According to Lumenistics.com, a hotel in Las Vegas reportedly replaced inefficient metal halide lights on the building’s facade with LED lighting; this move saved the facility about $41,000/annually.

In the same article about the casino in Vegas, there was a casino in Wisconsin that was expected to save more than $221,000 in electric costs the first year the building’s new LED lights are in use, and $120,000 in maintenance costs over the next six years.

Switching to LED bulbs give facilities more time to focus on other labor costs, maintenance situations, asset management, and less time focusing on an asset that can basically take care of itself and save you money.

Wouldn’t you want more options like that for your facility?