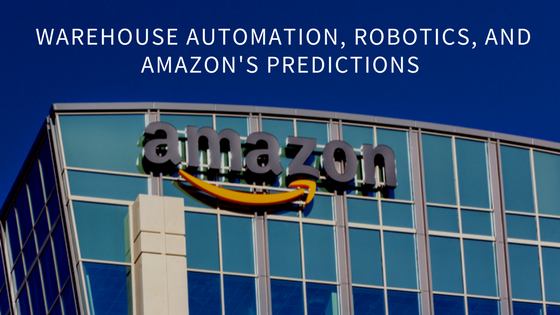 Amazon, the largest U.S. e-commerce company, has about 45,000 robots working in its warehouses but so far they aren’t replacing people’s jobs but merely being an added benefit to workers. However, robots may soon take on a larger share of the warehouse work.

A startup called RightHand robotics began piloting back in April 2017 a technology that no other robot has yet mastered, including Amazon’s robots: the ability to recognize and pick up items from boxes.

Like robots elsewhere, Amazon’s robots can retrieve entire shelves and transport them to humans where they are sorted and picked through. Robots can find and move a shelf that holds a box of shirts, but they aren’t capable of removing a single shirt from that box to be packed in an order.

Amazon mentioned that robots need to master the more complex task of identifying a wide range of objects and adjusting their grips accordingly.

Amazon continued on by saying that this has been a consistent challenge and each year hosts a ‘picking challenge’ in which robots compete to solve it. The best robot yet is still too slow and too inaccurate to be pushed out commercially. Last year, the robot that won the $50,000 prize moved items at a speed of 100 items per hour and failed to pick up and move the correct item around 17% of the time, according to TechRepublic.

RightHand robotics built a solution called RightPick that according to co-founder Leif Jentoft can pick items at a rate of 500-600 per hour- a speed on par with a human worker. It uses a machine learning background and a sensorized robot hand to recognize and handle thousands of items.

The robots still though are not working at the level that a human can. They get stumped on tasks like getting products out of plastic wrap or other obscure materials. But RightPick is functional enough to be deployed in pilot programs at warehouses of unnamed companies.

Righthand’s Jentoft said robots in the pilot programs are being used mostly to pick items from boxes. Packing items to be shipped requires more complex tasks like removing hangars and nestling items into boxes in a way that fits best. This in turn means humans are still an influential part of the warehouse process.

Amazon looks at the above story as a success for humans because warehouses will be able to utilize their people for more than just manual labor; they also said back in January that it will create 100,000 full-time US jobs for people within the next 18-months.

Amazon is not new to the game of automation, but automation has quickly spread over the last few years of being a new way of the future and giving workers an opportunity to do more and expand the workforce.

It’s an automated world, and we are living in it

Amazon’s fulfillment centers are already partially automated, with a growing number of centers using Kiva robots to carry shelves of products to human workers, who pick the items to be shipped.

Without Automation, Amazon would be unable to ship items to millions of people each day and as the retail giant moves toward its goal of being able to delivery in 30-minutes it needs to continue to streamline delivery.

Amazon realizes the importance of streamlining, and their latest acquisition could be another test in a different market- grocers.

Amazon acquired Whole Foods in June 2017, and one hunch I have would be they want to automate the grocery industry by bringing the same principles of automation to grocery shopping.

Grocery shopping to most is a mundane task that you want to complete as quickly as possible. Even as of late you are starting to see more self-checkout lines in Walmart, Super Target, and even some local convenience stores in the healthcare department.

Self-checkout allows people to scan and pay for their items without ever having to interact with another person. Yes, there are times of assistance and a human is still present to help in those times, i.e. buying alcohol, but what if it could be even more simple than that?

Soon enough we could have the ability to walk into a grocery store and as we passed through the entrance our ‘Apple Wallet’ was located on us and anything we put into a cart or basket would be added to our final bill and once we exited the store it would be charged to our card. The ability to eliminate another step of going through a self-checkout. Now, there is the concern again with alcohol or items that need handling like meats or fish, but that process could be here quicker than we know.

Automation and creativity are the main drivers right now, and the people helping man those ships will be at the forefront of the automation revolution.