Will Cable Pair Up with Wireless Partners to Help the Bottom Line? 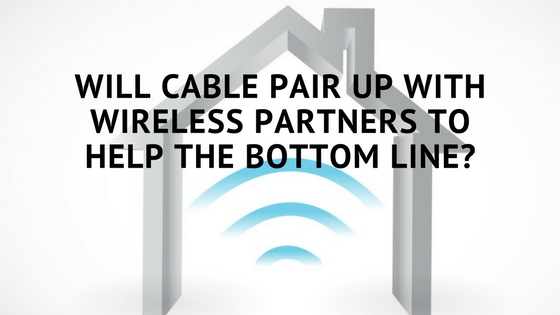 Mr. Wang explained it as cable operators are working to move from inside the home to outside, while the wireless operators want to move from outside to in. That is where the battleground lies today. WiFi is the clear platform for wireless in the home and cable has the advantage there.

Mr. Wang and other consultants brought these topics up at the Cable Next-Gen Technologies and Strategies convention in Denver a couple weeks back, explaining the importance of Wifi and how cable operators prepare to expand their wings.

The bigger issue around using WiFi as a jumping-off point for wireless service is the ability to “operationalize” it and sell it in the way that’s meaningful to the bottom line of the company, according to Margaret Bellville, former COO of Charter Communications Inc.

Cable operators have failed in the past to sell wireless as an ad hoc service and partnerships with wireless operators can be tricky to pull off and make both parties happy.

Cable hasn’t launched a new product within the digital and data space for quite some time. Cable will have to learn how to market digital in a way that will impact their bottom line in order to make a greater profit for them and their clients.

Partnering with wireless operators is a scenario that should be appealing to many cable companies — and should be to wireless-only operators as well. The cable industry is in a strong position to partner because you can’t do wireless without wires, said Charles Cheevers, CTO for advanced development at Arris Group Inc.

Partnerships, however, are also a viable option, and Wang pointed out wireless and cable providers already partner on backhaul. Cable companies have to push their position so that when they come to the bargaining table, they look like attractive partners rather than just acquisition targets.

A good place to start would be with large corporations, businesses, and schools. This could give companies a way to expand quickly by being picked up among campuses and then distributed to other similar companies and have an edge up on the competition.