Why Disney+ Could Be Tough to Beat 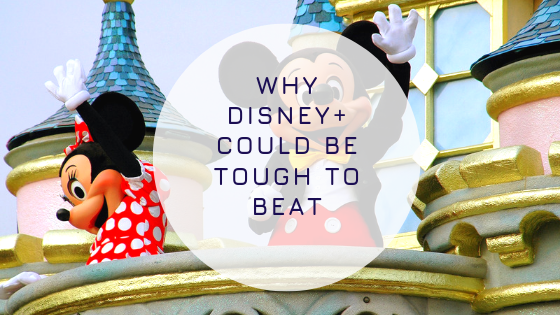 Disney is betting big on its 2019 streaming service called Disney+ that will launch November 12, 2019.

Last week, Disney CEO Bob Iger headlined a presentation at the company’s Buena Vista Studios in California that included demos of the Disney+ app, trailers, and behind-the-scenes footage of its exclusive shows like Star Wars TV series, The Mandalorian.

Much of the premium original content planned for Disney+ leans into the company’s big-budget franchises like Marvel and Star Wars. Some shows like The Mandalorian have completed filming and will be available at launch. Other Marvel spinoffs, like shows based on Loki and WandaVision featuring Scarlet Witch and Vision will debut in 2020.

So, is the streaming service worth adding to your streaming lineup?

Is Disney+ Worth It?

The Disney+ streaming service will be competing with other video streaming services like Netflix. It’s free of advertising and customers will pay a monthly fee to access the vast library of Disney and Fox legacy content including shows, movies, and documentaries. The service will cost $6.99/month or $70/year. Its price undercuts Netflix’s new rate of $13/month for its most popular plan in the U.S. which lets viewers stream two different devices simultaneously.

Disney CFO, Christine M. McCarthy hinted Disney+ pricing may rise as the service advances calling the $6.99/month the “initial” price. The company also said it’s likely to bundle Disney+ with Hulu and ESPN Plus, offering a discount if you subscribe to two or three of its streaming options.

Hulu will be where Disney streams more adult-oriented content such as the Marvel collection of grown-up animated series and Deadpool-like content. Hulu will continue to stream its own original series’ as well including The Handmaid’s Tale and Castle Rock.

Disney+ will support streaming to phones, tablets, computers, connected TVs and streaming media boxes the company announced. Disney specifically called out support for Roku TVs and Playstation 4. Disney’s goal is to have a wide device support for Disney+ by the service’s November launch.

Disney+ will be the only place viewers can stream ALL of Disney’s theatrically released movies starting with Captain Marvel at launch and the rest of its 2019 slate later on. Frozen 2, for example, will be streamable on the service in the summer of 2020 after its theatrical release in November 2019. Disney+ will also house the entire film libraries of Pixar, Star Wars and its Signature Series and Disney Vault lines of classic hand-drawn animated movies (Snow White, Bambi, and The Lion King).

And of course, the company is developing a big slate of original movies and shows, like Netflix does, on their platform.

Disney will mostly disappear from Netflix by late 2019.

But Disney decided against renewing that Netflix deal and went their own route and chose to compete against Netflix. That means Captain Marvel, the first movie Disney released theatrically in 2019 will be the first movie Netflix misses out on and Mary Poppins Returns should be the final movie seen on Netflix before the cut off in late 2019.

What shows are important to viewers? Can they spring to spend an extra $7/month on top of existing subscriptions? The subscriptions begin to add up if you partake in Hulu’s no-commercial plan for $11.99/month, which doesn’t include any additional add-ons like HBO or Starz, Netflix for $13/month, and now Disney+ for $6.99/month. That’s about $32/month not including an internet package or an additional cable package.

Content remains king and viewers will more than likely pay for the content they want to watch even if it is an add-on, but they will also drop a subscription that doesn’t bring value. Loyalty is a fickle game when it comes to streaming services because it’s about staying relevant and paying attention to what the consumer is watching. Pay attention as services could be in for a bumpy road ahead.