Sprint in Talks with Comcast and Charter on Wireless Takeover 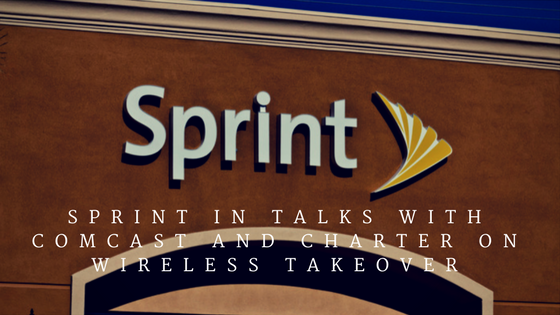 Comcast Corp., the nation’s No. 1 cable-TV company, is talking with Sprint Corp. about access to its wireless network as speculation boils that Sprint could be bought out by a coalition of cable companies or by T-Mobile.

Sprint has been considered the weakest of the national wireless carriers and they have been a persistent target of takeover.

Comcast also has a reseller agreement with Sprint dating to 2008, when it invested with Time Warner Cable and computer-chip company Intel in Clearwire, a failed high-speed wireless venture. Comcast and Charter Communications, which acquired Time Warner Cable in 2016, are now looking to improve the financial terms of that reseller agreement to operate cable-based wireless services.

There was also speculation late June that Comcast could potentially purchase Sprint as part of the takeover. Amy Yong, telecom analyst with Macquarie Capital commented Comcast and Charter have taken their partnership to the next level with an exclusive re-seller agreement with Sprint, likely halting any potential T-Mobile-Sprint deal in the near-term. One scenario could entail either [Comcast or Charter] taking a stake in or merging with Sprint.

Comcast and Charter also made an agreement early in 2017 that neither of them would purchase a wireless provider without seeking approval from the other; a deal that could enable two cable companies to jointly negotiate terms with smartphone manufacturers.

Will Comcast and Charter Partner to Takeover Sprint?

Sprint on the surface would gain from this takeover because they would gain revenue that is being taken away from Verizon, but the real benefit would come if it could tap into the cable operators’ fiber.

Wells Fargo Securities LLC analyst Jennifer Fritzsche suggested Sprint needs to boost its capacity for backhaul, or carrying traffic once it comes off the wireless tower.

Sprint would need to address the issue of not having a meaningful fiber because that is a big pressure point in the wireless expense model.

Comcast and Charter have deployed fiber throughout their footprints, and as a part of a wireless resale deal, Sprint could arguable negotiate a favorable deal to piggy back on the cable networks without leasing or building the infrastructure itself.