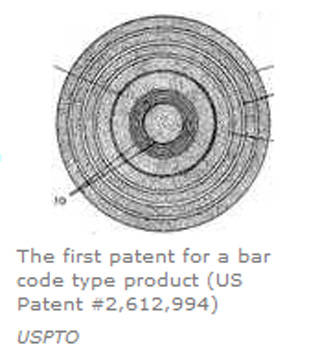 Almost 70 years ago, the first patent was issued for a bar code type product (US Patent # 2,612,994) to a pair of inventors named Joseph Woodland and Bernard Silver. Sadly, the last surviving member of this team, Mr. Woodland, passed away on Sunday December 9, 2012 but their legacy lives on.

Together the two Drexel graduates students changed not only the grocery industry but also set the stage for bar code development in everything from railroads to patient identification. In fact, today bar codes are found on almost all grocery items and used by department stores, merchandisers, shipping and cable companies.

A Brief History of Bar Code

The original patent by Woodland and Silver was filed in on October 20, 1949 where they described their invention as article classification…through the medium of identifying patterns. The idea came about as a result of Silver overhearing a conversation between a grocery store executive and a school engineering Dean asking for help in capturing product information at checkout.

Over the next two decades, Woodland’s work at IBM helped them develop a standard for universal product code technology (UPC). Although the first commercial use of bar codes was to label railroad cars in 1966, there was not an industry standard that would enable mass use.

In 1970 the Universal Grocery Products Identification Code (UGPIC) was written. This code morphed into the Uniform Product Code (UPC) in 1973 and is still in use today.

However, bar code technology was not truly accepted until bar code reading scanners were developed in 1970’s. The first product sold using a UPC scan was a package of Wrigley’s chewing gum in 1974. The pack of gum and the receipt are now on display in the Smithsonian Institution.

Bar codes are now found almost everywhere and are used in a variety of industries ranging from grocery stores to manufacturing. Today there are over 5 billion products that are scanned and tracked worldwide every day.

The Bar Code Impact on the Cable Industry

One of the industries that has benefited from bar codes is Cable. The development of bar code scanners allows CPE to be tracked from the point of origin to its final destination. Cable MSOs can now know where their CPE is at any point in time and who it is accountable for it.

For example, cable warehouse management systems that use bar codes and scanners have enabled serialized reconciliations, reduced CPE theft and enabled CPE to be tracked through third party and repair vendors.

In addition, the bar code tracking of CPE has provided cable hub and spoke operations to more accurately gauge their CPEneeds for better inventory management. This has led substantial cost savings for cable MSOs allowing them to invest in better infrastructure, products and services.

Most cable companies currently make use of conventional 1 D bar codes to label CPE. However, they will need to change to 2 D bar codes in the coming years as the requirements for billing and provisioning systems necessitates the need for additional information to be collected. (2 D bar codes hold more information by storing information both horizontally and vertically).

The Future of Bar Code Technology

Due to the low cost of implementing bar codes to track products, the technology remained unchallenged for many years. However, recent years have seen advances in radio frequency identification (RFID) which in all likelihood will replace bar coding over the next decade.

The growth of RFID technology is only limited by the ability to replace bar codes. Since bar codes are so interwoven into business today, replacing them will take a lengthy amount of time. Until that time, we salute Mr. Woodland and Mr. Silver for their contributions to our society.