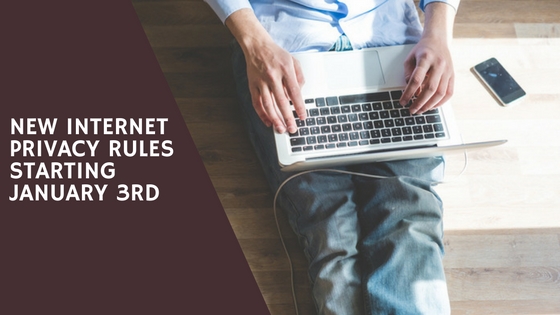 A new set of Commissioners will come to term in January, but the current Democratic majority is implementing a new Internet privacy rule that goes into effect January 3, 2017.

The FCC announced the controversial privacy regulations that will go into effect in January, however certain new data security obligations will not be effective until March 2nd. Additionally, some customer notifications and approval elements of the ruling will not be in place until later in 2017.

Internet service providers will be required for the first time to get opt-in permission from customers to collect any sensitive information, including web browsing and app usage history.

This is controversial because Internet companies, like Google and Facebook aren’t bound by the same obligations and in turn can make broader use of customer data such as ad targeting to promote products and services.

The Internet privacy ruling passed along party lines, with three democratic votes sealing the deal. However, Democratic Commissioner Jessica Rosenworcel did mention that there should be an effort to harmonize regulations in the future so that ISPs and so-called edge providers are treated more equally.

Edge providers, such as Google and Facebook are governed by the FTC while broadband providers are instructed by the FCC’s mandate giving edge providers more leeway in how they can promote to their audiences. Rosenworcel was hoping that an inter-agency council might be setup to coordinate privacy regulations.

However, with the Republican party taking control starting January 20th certain items the Democratic party would have liked to instill just don’t look to be an option right now, including new set-top regulations and business data services.

GOP Majority in the FCC

Republicans will have the majority vote after Trump takes office, January 20th. This move makes it easier for Republicans to try and repeal regulations instilled by the Democratic party.

The FCC is expected to try and weaken the net neutrality regulation which was enacted in 2015. Republicans said they didn’t oppose the goals of net neutrality such as prohibiting broadband companies from slowing down internet speed for consumers and then selling faster lanes for delivering data. But they strongly objected to classifying broadband providers for the same type of regulatory oversight as conventional phone companies.

What could this mean now for broadband providers? Will they have less restrictions on what can/can’t be served to customers in terms of content advertising? Are Republicans looking more to just make “fair” rules between cable providers and phone companies?

Time will begin to tell on January 20th.