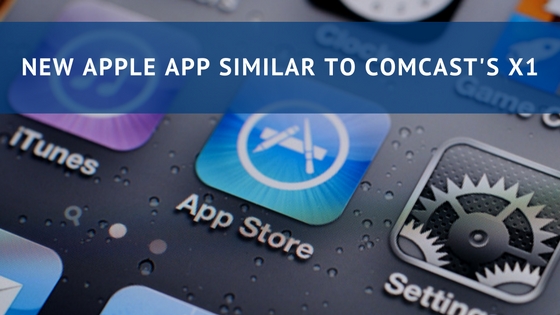 CEO Tim Cook announced how the new Apple TV app will change the way consumers watch TV, but it strikes a similar resemblance to the Comcast app that focuses on a single, unified guide for everything you watch.

Tim Cook mentioned at the Apple event last week we want Apple TV to be the one place to access all of your television. One of the critical features of this app is the ability to sign on once with pay-TV credentials and then get authenticated across every installed TV app both on TV and mobile.

The app also offers up a “Water Now” menu which displays any shows the customer has watched previously and makes recommendations on future shows or episodes to watch in the “What to Watch” bar.

Since the Apple TV interface is an aggregation point for lots of different apps it starts with a unified search function and integrated content results, but then puts a user directly into the relevant app to view content.

Viewers can also use Siri for voice navigation for video options and also dialog with Siri in order to get information on what other shows are on at the time of watching or in the future.

Ironically, many of the features Apple announced with Apple TV is comparable to those currently available on Comcast’s X1 platform. See See Top 6 EAM and Cable updates; Comcast confirms Netflix coming to x1

What is Comcast already offering?

Comcast has started rolling out Netflix integration to X1 subscribers, and that integration includes merging Netflix content into the X1 program guide and TV search function. As with the Apple app, X1 lets users jump back and forth between the Netflix UI and Comcast’s own interface. X1 subscribers can also voice commands to discover and tune to different video streams.

The crucial difference between Apple’s app and Comcast’s X1 is that Comcast makes their content easier to access by not separating it out into individual apps like Apple does by bundling.

Accessing dozens of individual apps could potentially make the Apple TV experience more disjointed. Those apps also might or might not carry the same selection available through traditional linear and on-demand television.

Comcast has Netflix and its own channel line-up as part of the X1, where Apple has not yet reached a deal to include Netflix but does over a variety of other channels.

It will be interesting to see how Apple TV and Comcast along with other pay-TV providers continue to respond to one another in this content and viewer rivalry.

Apple announced last week their integration with Twitter to make it possible for viewers to watch live video from events like football games through the Apple TV. Will other pay-TV providers start integrating with social platforms in order to get more viewers through streaming?

Or, we could take it the other route and say how many people will want to stream sports or events or election news from Twitter and have a stream of integrated internet-based content streaming across their TV screen?

How much do you think a client is worth to providers?