Is Your Facility Prepared for Hurricane Irma? 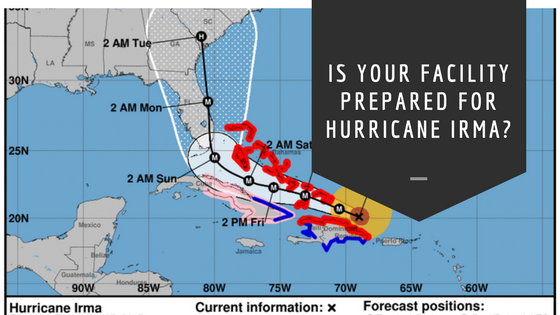 According to the National Hurricane Center, Hurricane Irma is the strongest Atlantic basic hurricane ever recorded.

As it bears down on the Caribbean and the southeast United States, here are some shocking numbers to consider when staying safe this weekend and preparations to take for yourself and your facilities.

Minimizing Damages is About Preparation

The impact on hotel asset management from natural disasters is well documented. Perhaps the most damaging events are the occurrence of hurricanes. With so many expensive hotels located near the U.S. coastline it is imperative that hotels be prepared for severe weather events.

Preparing your hotel for the possibility of a hurricane, tropical storm or any type of severe weather only takes a little preventive maintenance planning and can be performed relatively quickly by making use of storm checklists.

Your checklist should consist of a list of your assets that need to be inspected and prepared for the upcoming storm. This list could be a simple spreadsheet that is generated from your CMMS. How it is generated isn’t half as important as how it is used.

Once a checklist has been created it is maintenance management’s responsibility to ensure that each item is inspected, secured, and in working order.

Once the hotel’s assets have been organized by type, the next step would be to separate them into areas for faster action.

When your assets are organized into a manageable checklist, inspections can be accomplished relatively quickly. For even faster results the mobility of maintenance teams can be increased using mobile devices which enable inspections, work orders and repairs to be performed online.

In relation to Hurricane Irma, it passed through Puerto Rico late Wednesday and now on the path to the Bahamas and scheduled to pass through Florida Sunday, September 10th.

Mintek hopes all residents and families stay safe during this storm; stay up to date on the latest coverage of Hurricane Irma to ensure your safety.