How Has Sports TV Viewership Changed? 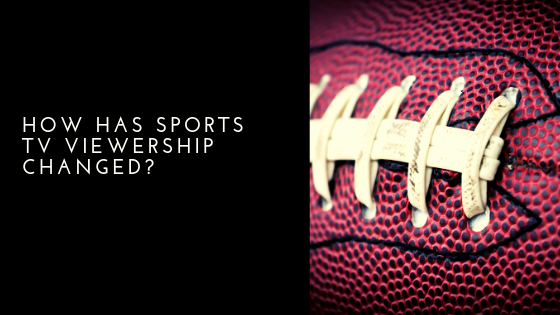 How are viewers watching their favorite sports team? The way viewers watch TV shows and movies has been transformed by mobile devices and the video-on-demand industry. But another surprising turn of events is how people are consuming sports content and the shifts they are taking.

This change could raise concerns for sports media in the future, but it actually points more to new opportunities in how to engage fans in their favorite content and enhance the viewer experience.

Live broadcasting has been the heart of sports viewership for decades. The live nature of sports TV is compelling and gives audiences the feel that they are actually in the stadium rooting for their team. However, even marquee events like the Super Bowl have a hard time drawing a crowd.

Now, this could be because the game itself wasn’t the most eventful (depending on whom you ask), but if you look at Super Bowl ratings in the past, there is a downward trend and viewers are moving away from real-time viewing and switching to digital fronts.

Here are a few ways the sports viewer industry is changing:

An October 2017 report from McKinsey found that ratings for sports TV have dropped, but not because fewer people are tuning in. “Overall reach for sports on TV hasn’t declined; ratings have dropped because fans are watching fewer and shorter sessions,” the report said. “In a world with so many sports options across so many screens, sports fans of all ages are clicking away from low-stakes or lopsided games.”

In fact, the NBA recently embraced social by making its minor league games available on social streaming platform, Twitch. This could entice viewers to purchase a subscription to see the regular season instead of going through a cable subscription.

2. Fans are no longer limiting their viewership to just the actual games

Sports viewers are engaging with supplemental content instead of or in addition to the games themselves. Google released a report in January 2018 called 3 ways online video is changing what it means to be a sports fan discussing how “viewers are increasingly seeking out videos of top game moments, with an 80% increase of sports “highlights” video views on YouTube.

There was also a 60% jump in viewership of sports “interview” videos on YouTube.” This shows that the highlights could be the most important aspect of the game to the viewer and it’s not worth it to them to watch the game in its entirety but just see the most captivating moments.

3. People are watching sports on digital more than ever

During the 2018 FIFA World Cup, Fox Sports saw a number of digital users tuning in to watch that was 15% to 20% higher than they had predicted, according to a recent panel discussion at NAB NY 2018.

Fox had put all of its pre and post-game coverage on its Fox Sports app, in addition to the live games, and they found people tuning in in large numbers, even during working hours. The digital turn of sports viewing gives content providers new ways, and new times, to reach viewers. Fans no longer need to be in front of a television to engage with their favorite leagues, teams and players.

Yet, this shift means the need for seamless digital experiences are more important than ever, too. Fans may be turning to digital for streaming and pre and post-game content. But given the overall decreasing attention span, providers must ensure their viewers don’t experience buffering, annoying ads and other distractions that may turn them away from the digital experience as well.

Video-on-demand may never be able to replace the live thrill of watching a game in real time and that’s where cable can continue to make strides, but the ultimate goal is appealing to the audience and making them want to stay and watch the desired content.

Attention spans are hard enough to attain but to keep them focused on designated content is even harder with the multitude of options available. Providers need to focus on what is going to grasp the audiences attention, hang on to it, and hang on tight.