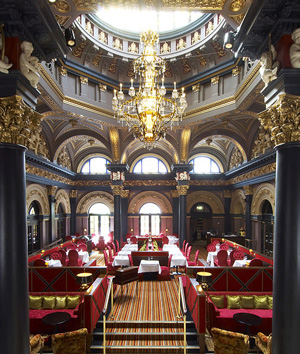 The season’s last episode of Hotel Impossible featuring the Western Rivera combined two common themes found during in the show which are a lack of hotel experience and no marketing vision. Taking a look at yesterday’s scenario, potential hoteliers can see how difficult it is to establish a successful hotel without just one of these skills let alone need both.

To put things in perspective, the Western Riviera is located near the continental divide in Colorado adjacent to Rocky Mountain National Park. The hotel sits on the edge of a gorgeous lake and did a fair amount of business during the summer months.

Unfortunately, the summer season only lasted several months and the area was covered by snow 8 months of the year. The hotel as well as the town of Grand Lake basically shut down during the winter months except for an Alice in Wonderland themed winter carnival which did look like a lot of fun.

The owners, Mike and Jackie Tompkins, had been buying property in the area for 13 years. Their holdings included the hotel, a dozen lakeside cabins, a tree house, condo’s and an event center that was used mostly for weddings during the summer season.

However, the owners had never turned a profit due primarily to their lack of hotel experience and a failure to recognize and capitalize on winter activities. This presented several opportunities for hotel improvements as well as a need for outside consultants to bring in their marketing expertise.

The Impact of No Hotel Operational Experience

The lack of hotel management experience went beyond the owners. Discussions with the GM and Head of Housekeeping revealed they had no experience either. The resulting impact affected hotel maintenance, housekeeping and marketing and included:

The rooms were indicative of where the owner needed to focus his money. More modern rooms were needed to help attract guests and charge higher room rates. This has been a common issue with many of the hotels featured on Hotel Impossible.

The other main issue was a lack of marketing vision. With no experience, the owners (as well as the town Chamber of Commerce) had no idea of the opportunities they were missing. The most obvious opportunity was that the town and hotel were located in the middle of a snowmobiler’s paradise. Just as importantly the hotel had no competition.

Missed Opportunities from the Lack of Hotel Marketing.

Host Anthony Melchiorri was able to discover that there were over 130 miles of snowmobile trails, ample room for cross country skiing and a frozen lake perfect for ice fishing. Unfortunately, the local operators were not working together and developing mutual plans such as snow mobile and hotel stay packages.

In addition, Anthony discovered that the event center was not being scheduled during the winter and there was no effort to perform online marketing with travel agencies.

When everything was added together it became clear the Western Riviera, adventure groups (ice fishing, snow mobile operators) and the town needed to work together as a team in order to attract winter tourism dollars.

As expected, the fixes were simple in nature but will take time. Hotel Impossible designer Blanche developed a very nice room theme that is easily reproduced and provided the owners vendor checklist and how the rooms could be renovated.

The show also brought in an Internet marketing expert to work with the local Chamber of Commerce. His task was to introduce them to social media marketing and create a series of video to help promote the area. For example, it was noted that that there were many Facebook groups for snowmobiling with about 650,000 likes/members as well as several social sites/organizations.

Other fixes included bringing in another marketing expert to help the hotel owners market their event center year-round and the development of mutual packages between the hotel and sports groups.

Together these changes could at least point the owners in the right direction. As always it is up to the owners to follow up and capitalize on opportunities after the cast leaves.