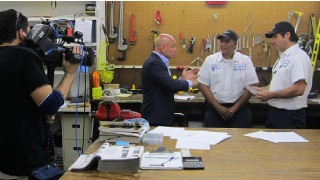 t looks like Hotel Impossible is a success as the show has been picked up for a second season. What can the owners and senior managers of Hotels, Inns and Lodges learn from the show? The answer is to perform a reality check starting at the top. The lessons learned here can be used by any new hotel owner or start-up ventures.

Start Hotel Change at the Top

The show chose hotels with seemingly different situations but if you have read the prior posts you should have realized that every single one of them was controllable. In every hotel the problems were self-inflicted and usually took years to develop.

Fortunately the host of the show, Anthony Melchiorri, had the skill to quickly weed through the finger pointing to address the root cause of poor top hotel management. He was able to effect change by getting the hotel owners and managers to realize their own management and experience shortcomings.

This was critical in every show as the problems that top management were causing would never be fixed unless they realized that change starts with them. As with any corporate or hotel culture change, buy-in is a must at every level.

What Can Hoteliers Learn from Hotel Impossible?

In watching the series, one of the first things any hotelier should have picked up on is that having the right energy and attitude make a huge difference. Every hotel needs to be lead by people who have a can-do attitude. These are people willing to step up to the plate to assume responsibility, to take charge, to provide an infusion of new thought.

In many of the episodes, Anthony found that the people needed to fill key roles were already on staff. They just needed to be challenged and for someone to have confidence in them. By recognizing that people inherently want to do a good job, Anthony was able to help put the hotels back on track. He did this very well and in only one episode was there a need to obtain outside hotel management.

Once the hotel owners and managers had received their attitude adjustment, the hotel was able to address the three recurring opportunities that seemed to be prevalent for each hotel. These opportunities were maintenance, housekeeping and marketing.

There was no doubt that from the very first episode that the hot button for Anthony was cleanliness. Each episode started with a quick inspection of the premises, lobby and rooms. The most common issues found included:

“To guests, cleanliness is the single most important thing in choosing a hotel”

“I was going to measure the bacteria level on the handle of the toilet bowl, but really, what’s the point? There are twenty dead cockroaches in the bathroom.”

The fix for most of these hotels and Inns was to establish a system for room inspections and their care. This might have included checklists, training, supplies, new carts and/or better supervision.

The second notable issue was hotel maintenance. Not surprisingly, the weaker the hotel management the more maintenance issues were discovered. Similar to large hotel chains, maintenance is one of the first things cut back when revenues drop.

The episodes where maintenance was more of a problem than housekeeping were all situations where hotel management had neglected their assets for too long. Instead of minor preventive maintenance and repairs, many of the hotels needed substantial renovation. The most common maintenance problems were:

For most of the hotels where maintenance was the primary issue there was a lack of maintenance staff along with no system to track maintenance and repairs. Unfortunately for management they found out the hard way the deferred or neglected maintenance is almost always more expensive than preventive maintenance.

The third most discussed reason why the hotels were failing was a lack of marketing. For the featured hotels where this was the primary concern it was because either the owners or marketing person had no experience or they were relying on marketing methods from 20-30 years ago.

Anthony’s fix was fairly consistent and this is always the part of the show where he brought in his interior designer. They were:

Did all This Really Work

Any turnaround expert will tell you that lasting change takes time as people and culture do not change overnight. Giving people the tools and systems they need to be successful does not guarantee success. Change needs to be managed and followed up on a regular basis especially since some of the hotel owners seemed to accept the changes more willingly than others.

However, since the Hotel Impossible crew only had 3-4 days to spend at each hotel, it is difficult to figure out if the owners had really adjusted their attitudes or simple gave Anthony lip service because they were on TV.

At the end of the show the final picture was a highlight of the impact that Hotel Impossible had such as increased bookings or increased revenues. But the success for some of the hotels also seems to be short-lived as comments received on prior posts suggest that once the cast leaves, the hotels start reverting back to their old ways.

We hope all the hotels featured in the show find success and look forward to the new season airing in December.