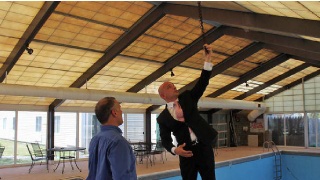 What happens to a hotel when the owner spends a lot of money on gym equipment and forgets about the hotel upkeep? The answer is a hotel in deep trouble. This week’s Hotel Impossible episode featured the Newport Inn, a 120 room hotel that had seen its image and revenues decline for over a decade as a result of a neglected hotel room and asset maintenance.

The show began with host Anthony Melchiorri looking through the windows of a giant indoor pool that needed major work. He then met with the owner, John, telling him that the online reviews generally described the hotel as needing substantial renovations, looking run down and having ratty and scary looking bedding.

The owner’s response was he has purchased over $100,000 worth of gym equipment which he placed in the main banquet room. He had also purchased two hot tubs for 20k that were disconnected. His goal was to build revenues through a gym membership. There was obviously a tremendous disconnect between the owner and the hotel’s maintenance needs.

The result of the owner disconnect was a lack of hotel maintenance and terrible financial decision making that had nearly left the hotel in ruins. Anthony’s inspection of the hotel premises and talks with staff revealed:

In short, the Hotel was falling apart and was going to be empty for the upcoming yachting summer events that included the America’s Cup coming to Newport.

After sizing up the issues Mr. Melchiorri made an important comment:

Lastly, just like the Southern Oaks Inn episode the hotel’s best asset, the pool, was not being marketed.

The Fix for the Newport Inn

The fix for the Newport Inn was a little different than other hotels featured in the show that had severe maintenance challenges. As with other shows the Hotel Impossible crew renovated selected areas such as the pool, the luxury room and even put a new sign that effectively changed the name of the hotel to The Newport Inn.

These changes were only cosmetic and a bigger change needed to be made in order to make the hotel run alike a hotel should. Instead of asking the general manager to step up, Anthony brought in a new experienced VP of hotel operations to take charge. He was tasked with keeping the owner out of the day-to-day decisions and establishing the needed hotel systems.

Lastly, the owner was introduced to local marketing and business owners where he quickly established a partnership with a yacht owner that offered dinner cruises. He was also able to get listed on the number one source for Newport hotel information.

As the show ended the only real question that remained was whether or not the owner would revert back to his old ways once the Hotel Impossible crew left and try to make the hotel into a gym again.