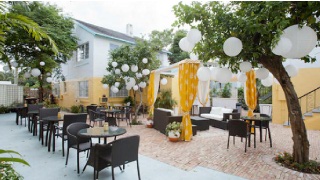 This week’s episode of Hotel Impossible featured the New Yorker Boutique Motel in Miami, FL. No that’s not a typo, the signage on the building said Motel. If you are guessing that the show centered around marketing and hotel management opportunities you are correct.

The motel, located on the outskirts of Miami’s art district is a 50 room family-owned establishment that had recently been renovated. The owners were struggling under a mountain of debt and on the brink of going under.

The show began with host, Anthony Melchiorri, doing a quick inspection of his room as well as the premises. He quickly noted that the hotel had an underutilized patio (where the breakfast was at), was very clean, had good bedding and that maintenance was up to speed. Only an unusual bathroom inspection item indicated any sort of maintenance issue.

After inspection of the business office and meeting with the owners it was very clear that the motel had an identity crisis and the management was totally and I mean totally overwhelmed. In addition, the motel owners were not performing any hotel marketing resulting in empty rooms.

One of first problems Anthony discovered at the hotel was signage that said New Yorker Boutique Motel. He noted that the difference between a motel and hotel was the amount of amenities and services offered.

With free Wi-Fi, free breakfast, room amenities and am airport shuttle service, the New Yorker Boutique was more of a hotel than a motel. Anthony also noted that the number one complaint by corporate travelers was free Wi-Fi. This was definitely a marketing opportunity that was being missed.

When Hotel Management is Overwhelmed

One of the things that was evident from the beginning of the show were that the owners were very disorganized and lacked the basis knowledge and skills to market the hotel. This could be seen with:

Signs that a Hotel is in Trouble

In short, no one knew the hotel existed and those that did were being ignored. The fix, in my opinion, was one of the easiest that Anthony faced.

One of the things I like about the Hotel Impossible host Anthony Melchiorri is that he recognizes that most people want to do a good job and that energy and attitude goes a long way to resolving problems. Hotel marketing skills can be taught if someone is willing to learn.

In the case of The New Yorker Boutique, the first marketing issue to overcome was the lack of confidence of the owners. A series of staged introductions to possible business referrals showed how quickly one can develop confidence and skills. In addition, he gave the owner a first-hand demonstration of how to negotiate and close a corporate customer. This immediately brought in critical cash infusion.

What were the results? One of the owners was able to stop working 16 hour days to spend time with her children and according to the end of the show credits, the hotel was 100% booked.