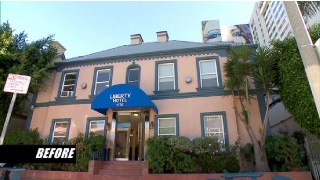 A new hotel owner with no experience is bound to make many mistakes. How and what you learn from these mistakes goes a long way toward determining the success or failure of a hotel. This week’s episode of Hotel Impossible, featuring the Liberty Hotel was a good example of an overwhelmed owner focusing on the wrong things and not being able to see the bigger hotel maintenance picture.

Briefly, the Liberty Hotel was a 21 room establishment in the heart of Hollywood, CA. The hotel was sandwiched between the Dolby Theater and the Hollywood Walk of Fame. The owners had bought the hotel just a few months before for $2 million in a bankruptcy deal. Yet despite its’ phenomenal location, the hotel was not faring well.

The Opportunity and Challenges for the Liberty Hotel

To obtain a better understanding of the situation, let me describe the opportunity, issues and challenges facing the owners when the host, Anthony Melchiorri, appeared on the scene:

After determining that the hotel was in horrific shape and a major safety liability, Anthony tried to convince Lida that the fixes were not minor. After continued insistence from Anthony that the hotel property be inspected, Lida finally agreed to bring in a building inspector to get a better perspective of the problems and what needed to be done.

The inspector was blunt; the hotel needed approximately 100k in repairs to address the fire and plumbing issues. The inspector also stated that in his opinion the hotel should be shut down for renovations and repairs. He estimated that repairs would take about a month.

Unfortunately, Lida was extremely reluctant to shut down the hotel. Her belief was that she could do the repairs and renovations piece by piece. Her perspective was that by doing the work piece by piece the hotel could still have a revenue stream.

Anthony strongly suggested that by following the inspector’s recommendation the hotel could be fixed properly and not put guest, safety and the hotel’s reputation at risk. Anthony did not feel that Lida had the hotel experience or the time to manage the hotel and all the fixes at the same time.

The Fix for the Liberty Hotel

Even though Anthony and building inspector both suggested Lida shut the hotel down for repairs and refurbishment instead of continuing operation, Anthony offered Lida the choice of making the necessary changes in pieces. It was only after she initially chooses to keep the hotel open that Anthony realized he made a mistake and should have insisted that the hotel be closed.

To make a long story short, the Anthony tried to change the owner’s minds by demonstrating what a completely renovated room (plumbing, furniture and fixtures) would look like. He also showed the owners a chart suggesting that the hotel could be profitable and have a valuation of $6.5 million in two years by shutting down now. The chart also demonstrated that by attacking the problems in a piece meal fashion, the owners would have debt in 2 years.

In addition, based upon several recent online travel reviews; the hotel remains in dire trouble. For example, Nicole in CA says “The hotel was under construction. We walked into our room and tried to use the TV, faucet etc.. Nothing worked! The bedding was even completely stained. There was no way I was staying in a hotel where nothing works and the bedding was disgusting!”

D.H. from San Diego adds, “Mold in the shower and a big hole in the ceiling because the shower above that was leaking. Customer service is OK. Had to ask for another washcloth. There was hair in the sink upon arrival (YUK).”

Clearly, the owners thought they knew better than the experts they were asking for help from. Successful entrepreneurs know the importance of surrounding themselves and listening to experts. This is the reason many new ventures have Boards of Advisors or an active investor.

Today’s lesson for hoteliers and entrepreneurs alike is that a good operating plan must be adjustable to its’ changing environment. The owners of the Liberty Hotel had a plan but that plan was did not factor in the actual condition of the hotel which was a game changer.

I do not see the Liberty Hotel succeeding. Tell us what you think of their chances.