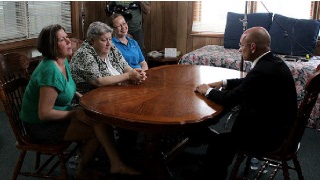 What happens when hotels do not recognize the need for change? The short is answer is a slow creep into oblivion. This week’s episode of Hotel Impossible featuring the Lankford Hotel in Ocean City, MD, is a great example of a dysfunctional family paralyzed by a lack of communication and unable to change with the times.

Unlike most of the episodes over the last three seasons, the Lankford Hotel had experienced hotel management, clean rooms and a well maintained property. The hotel, situated on the Ocean City Boardwalk also operated 5 stores in an ideal location.

Yet despite its ideal location and an immaculate property, the hotel had only an 8% occupancy rate compared to 71% for similar hotels. In addition, only one of its stores seemed to be making any money. Fortunately, it did not take the host Anthony Melchiorri long to determine the real problem.

To describe the situation a little clearer, the Lankford hotel was owner by the Riker family which consisted of the mother Sally and her two daughters Sarah and Mary. Sally was the GM and also ran the one store that was showing a profit. Mary ran the front desk and housekeeping.

Sarah used to run the hotel operations but moved more to the store management after Mary had returned to the hotel a few years earlier. This was a big item of contention and set the stage for the two sisters not communicating.

Early on it was clear that the matriarch, Sally, was resistant to change. Her attitude was very similar to the owner of the Alpenhof Lodge (Season 2). The result was the hotel had not adjusted to technology and market demands. Some examples of this included:

No Credit only Gold

Getting the owners to understand the need for change was not easy. Change management can be a tricky situation especially when family dynamics are thrown into the picture.

One of the ways that Anthony addressed this was pretty cool. With the owners in tow, Anthony stopped a trolley going by the hotel and asked the riders several questions. In short, the trolley passengers (almost all families) gave a thumbs up to the hotel but a huge thumbs down when asked if they would stay at a hotel that did not accept credit cards. One trolley passenger even commented “What is a personal check?”

The Fixes and What Hoteliers Should Learn

The key to making changes at the Lankford Hotel was opening up the lines of communication between the sisters. The sisters had to be able to work together to provide a unified front to their mother. Without this communication no other change could be
successful.

Anthony handled this just as I would have. He put the two sisters in a room and said don’t come out until you are able to talk to each other. I have seen and done this numerous times in my career and it is something all hotel managers/owners can learn from.

With communication lines now open, the remaining tasks were to modernize the rooms, policies, technology and to monetize the non-revenue producing stores. This included:

It is difficult to say if the changes Anthony started will stay in place. Hopefully, the Lankford Hotel will be revisited in the future to see the results.