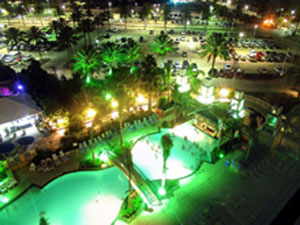 Last night’s episode of Hotel Impossible at the Gardenia Resort in Jamaica was potentially one of easiest hotel fixes I have seen in a while. It did not take long to realize that the opportunity to improve the hotel’s dismal 5% occupancy rate was basic hotel management and marketing.

The only part that did not make sense was why an experienced hotel owner with a degree in hospitality was not already addressing the problems. Perhaps this was because of the laid back culture of Jamaica or maybe the owner, Carlyle, did not fully comprehend the urgency of the situation.

To understand why, let us take a look at problems host Anthony Melchiorri discovered upon his visit to this 75 room, 4.5 acre island resort as he presented them.

The Gardenia Hotel Opportunities for Improvement

The following issues were identified by Anthony as he did his customary arrival, check-in, room and premises inspections:

The maintenance issues were for the most part an opportunity to be better organized and could easily be fixed by prioritizing work and making use of a hotel maintenance system. Unfortunately, these were not the only opportunities for improvement.

The above issues were basically an issue of training. The real issue was the demeanor of the general manager Richard, an experienced GM, had less courage than the lion from the Wizard of Oz rendering him completely ineffective as a leader.

Although extremely polite, his timidness in taking charge was leaving the staff without direction and training. Much of the show centered on getting Richard to step up and face his fears in the hope that a stronger leader could revitalize the staff.

Again, the one aspect that was missing is why the owner had not addressed these things himself. As I have stated many times before, leadership starts at the top. This question was not explored during the show.

The reason the fix was easy was because if the GM could be convinced to step up then the remaining issues could be easily handled with training and inexpensive renovations. The good news is that the GM appeared to overcome his fears and started taking charge.

The importance lesson is that knowledge and skills are useless without the energy and attitude to use them properly. The success of a hotel is highly dependent on its owner and key managers as these are the people that must lead change.

Other operational fixes included bringing in a professional trainer for the staff and renovations of the lobby and one hotel room. The room renovation could easily be duplicated without great expense.

On the marketing side, Anthony helped forge a marketing relationship with a Negril.com, the leading island Internet marketer so that the Gardenia Hotel could start taking advantage of their dominant Internet presence in Jamaica. He also had one of his sponsors set up a website that would allow for Internet reservations.

At the end of the show, it would appear that the owner and GM had things under control and could see a reversal of fortunes. The trailing screen of the show said occupancy had risen 50% which is good but given that occupancy was only at 5% this number needs a dramatic improvement.