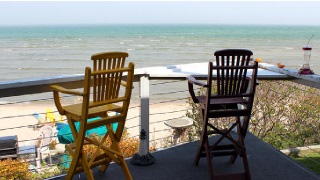 How can a clean, pet-friendly, well-maintained hotel that has 90% occupancy during the main season be in trouble? The answer makes this week’s recap of Hotel Impossible featuring the Beachfront Inn located on the eastern shore of Lake Michigan one of my simplest reviews.

In this episode, there was no long list of hotel maintenance items to be fixed nor was there any crazy and drama oriented family dynamics. The main issues seemed to be centered around a huge debt burden caused by poor financial decisions and a lack of communication between the owners, Terry and Tammy Bock.

The show began in the usual manner with Anthony’s arrival to the pretty little hotel. With no obvious signs of disrepair, he took a walk around and noticed some very expensive pool furniture. He also spoke to a couple of guests who indicated that the hotel was not as pet friendly as it was advertised.

Anthony then met with the owner, Tammy, who was stuffed behind a small desk in the lobby. When Anthony confronted her with the guest responses it became clear she was extremely stressed. The show continued on in the usual fashion with room and premises inspections.

The real issues surfaced when while meeting with the owners, when it was discovered that:

The Fixes for the Beachfront Inn and What Hoteliers Should Learn

The true fixes for the Beachfront Inn are simple to explain but difficult to implement. The difficulty in implementation is because the first true fix is a lesson in life skills and the second is … well complicated. Because of this I have significant doubt that the hotel will recover.

The first true fix was how to make better financial decisions. Between the thousands of dollars in new pool furniture and racking up debt, I do not believe this is an overnight fix. On the other hand Anthony was able to teach Tammy the basics of hotel revenue management.

Anthony explained to Tammy how and why to adjust room rates in order to mirror seasonal supply and demand. If done properly, the hotel could see a substantial increase in revenue and in fact the final trailer screen said revenue was up 20%.

The second true fix was to improve the communication between Terry and Tammy and to increase Terry’s involvement. Terry’s primary job was as a long-haul truck driver and he had indicated earlier in the show he preferred to be on the road away from his wife.

After talking with Terry, Anthony was able to get him to commit to being at the hotel full-time within a year. My perception was that Terry really didn’t like this idea. The final trailer screen proved me correct as it indicated that Terry and Tammy were seeing a marriage counselor.

I wish them luck and hope that they find a way to improve communication and save the hotel together. The lessons for hoteliersare that open communication and basic industry knowledge go a long way toward determining success.

Other Fixes for the Beachfront Inn

Of all the shows I have seen so far, I think that the Beachfront Inn has the most difficult obstacles to overcome. This will be an interesting hotel to revisit next season.