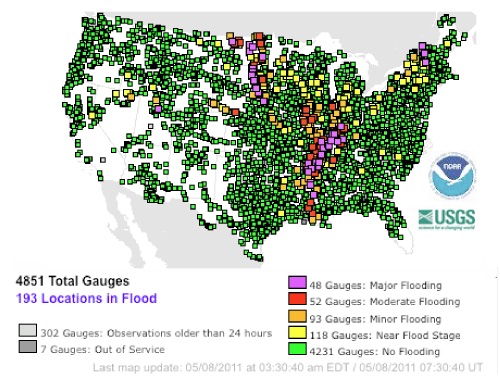 We all remember the effect of Hurricane Katrina on New Orleans and the criticism hurled at Federal, State and Local government for not having better disaster management plans in place. It would appear that governments have made significant improvements as they manage the raging floodwaters of the Mississippi in what may be the worst flooding since 1937.

In just a little more than a two week stretch in April, snow melt combined with the after effects of two major storm systems that dumped over 600% above normal rainfall in many parts of the Ohio and Mississippi watersheds has caused the Mississippi River to swell to the second highest level recorded.

Water levels continue to mount as the river flows south and different locations along the path of the Mississippi River are expecting to see the river crest in their area over the next week. Southern Louisiana is expected to be hardest hit in areas like Baton Rouge and New Orleans that could receive up to 25 feet of floodwaters if the levees break.

River Management by Government and the Army Corps of Engineers

In contrast to Hurricane Katrina, government asset management seem to be prepared for the river cresting’s. Local and State governments have issued evacuation orders, formed sand bag teams, clean up crews and established emergency centers.On the federal side the Army Corps of Engineers has been reinforcing levees with sandbags or high density polyethylene (HDPE) and opening spillways to reduce river water levels. The video below made by PBS is a little long but gives a great explanation of the levy and floodgate infrastructure.

Why Preventive Maintenance and Inspections are Necessary for Levees and Spillways

The current $13 billion system of levees and spillways along the Mississippi River were constructed after the great floods of 1937. In order for these systems to be effective they must work in a time of emergency.

“That’s the biggest monster to a levee — erosion…The Yazoo Backwater levee is designed to hold the Yazoo River and the Mississippi from flowing into the south Delta. If there were no levee, up to 2 million acres of land would be flooded,”

Source: Kavenaugh Breazeale, Spokesman for The Army Corps of Engineers

As with any natural disaster, there is not usually a whole lot of time to prepare asset management. The time that is available must be used effectively and not spent trying to repair an aging river infrastructure. Clearly the best way to accomplish this is to:

How a CMMS Helps Governments Prepare for Natural Disasters

A CMMS enables governments to record the location, age description, date of installation and cost (and many other details) of all assets. Once asset detail is loaded into the CMMS database, assets from all locations can be then be scheduled for inspections, preventive maintenance, repairs or any other task.

When used correctly, the CMMS system will record all work management including work requests, work orders, inspections and their results. The historical information that is collected is priceless when it comes to long term planning and capital analysis.

We all hope that the levees hold over the next week and wish communities affected by the flood waters a swift recovery.