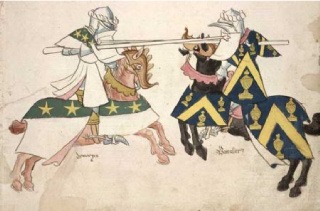 The History channel premiered its new show Full Metal Jousting on February 12, 2012 to stellar ratings that grew each half hour. New episodes begin this Sunday with an episode titled “Unhorsed” that promises to show at least one Jouster heading to the injury list.

The premise of the show is that 16 contestants split into two teams to compete to be the last man on their warhorse to win $100,000. To avoid fatal injury from blows with over 1,000 pounds of force (it only takes 7 pounds with a punch to knock someone out), armor and lances will need to have thorough inspections and repair after each battle.

Originally started as a Calvary training tactic, jousting soon developed as a sport in the high middle ages (10th-13th centuries). By the end of the 13th century jousting tournaments had become a way for knights to earn fame and money. Jousting tournaments in this time were often brutal with death/injury to man and horse.

Jousting continued to develop with specific rules and armor. By the end of the 15th century, two forms of jousting had evolved. The first made use of heavy plate armor and helmets that weighed up to 100 pounds and severely limited the movement of the knight. The object was to unhorse the knight (tilting).

The second was more sportive and centered around the striking of specified targets for points. Armor was lighter and included some chain mail, a lighter helmet, normal accessories and lots of decorative cloth. At this point, Lances were often made of balsa wood which were intended to break to avoid significant injury.

Jousting increased in popularity and continued to thrive until King Henry II of France was killed in a tournament in 1559. Soon after jousting was banned as a sport and existed only as theatrics for several hundred years.

Full metal jousting is based upon the more brutal form of medieval jousting. Special metal fabrication was done to construct the armor and 11 foot lances are now made out of solid fir tree wood. The estimated weight for the stainless steel armor is approximately 80-85 pounds.

To give you some idea of what the contestants will be wearing and their individual costs:

* Equipment and prices from Anshelm Arms and Armor a division of Dixie Fried Fabrication, the makers of the armor for the TV show.

Although I might have missed one or two items, you can see that it costs between $ 6,700 and $ 8,900 to fully outfit a knight. At a 1,000 pounds of force per hit this armor will not last for long. Like any steel, once the metal has been compromised repairs will only return a fraction of its original strength.

Armor and weapons are only a part of the costs. Warhorses weighing 2,000 pounds require years of training and care. Each horse is also outfitted with protective head and chest armor that can cost anywhere from $2,000 – $5000 (including saddle). Unfortunately, I was not able to find specifics on this so perhaps one of our readers can share their knowledge with us.

Given the violence that is inherent in the contest it is critical that inspections, preventive maintenance and repairs be performed on the equipment. Without an organized maintenance plan liability from injury could end up cancelling the show before any profits are realized.

Injury and liability can be minimized by ensuring that after each battle and over the course of the show that inspections, maintenance and repairs are performed for:

Although this is just another television show, the risk of injury makes maintenance of all sports venues and equipment assets a high priority. Yet, somehow I get the feeling that this is the forerunner to Rollerball or Running Man becoming a reality.