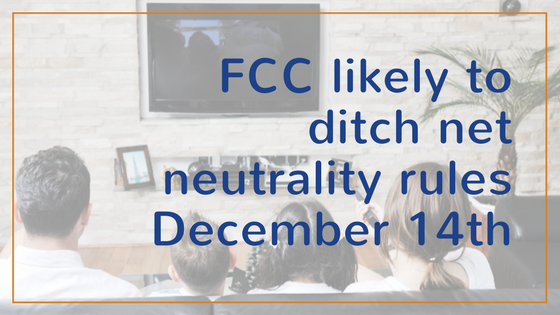 Ajit Pai announced back in November his plan to repeal net neutrality protections, and the FCC is making their final decision on the matter Thursday, December 14, 2017.

The net neutrality regulations were created in 2015 under the Obama administration to ensure that Internet service providers (ISPs) like Comcast, AT&T, and Verizon treat all companies equally online. The rules specifically helped to maintain an open Internet by preventing providers from blocking or slowing content online.

Pai said his proposal would allow the federal government to stop micromanaging the internet. Pai says, the FCC would simply require Internet service providers to be transparent about their practices so that consumers can buy the service plan that’s best for them.

The goal is to be transparent with consumers, so they can buy the best service plan that suits their TV viewing needs. So if Comcast, for example, chooses to block a website online for a specific reason, they simply need to inform consumers of its practices. This results in openness and a full-communication between the consumer and its provider.

Comcast has openly support Pai’s announcement back in November through their blog posts. David Cohen, Comcast’s Cable president said it is paramount that consumers know what their ISPs are doing. CEO Dave Watson also emphasized that the proposal to change the rules will not change Comcast’s customer protections.

Watson stated The FCC proposes to require us to continue to keep customers clearly informed on our net neutrality practices. Comcast maintains that it does not and will not block, throttle, or discriminate against lawful content.

Pai’s proposal also moves some regulatory power to the FTC, which has the ability to take legal action against companies that breach commitments made to their consumers/public. Basically, keep your terms and rules in open communication and if a service provider chooses not to do so they will be penalized and fined.

There are those that see Pai’s proposal as a way of benefiting the larger monopoly services that deliver the internet to the consumer, including Tom Wheeler, former FCC chairman.

The official December 14, 2017 FCC vote will likely repeal current net neutrality rules as the majority of the agency is a part of the Republican party; we will see how these rules pan out and if it stays true that the consumer will ultimately be kept in the foreground as the reason for this change and be kept informed the whole way through.