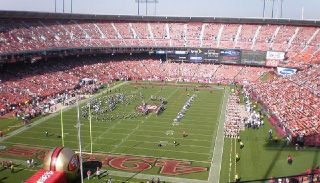 If you are the owner of a sports franchise, sports facility or supply the power to a sports venue then this article is a must-read for you.

The Night the Lights Went Out in San Francisco

Monday Night Football was delayed twice last night as a sold out crowd of 69,732 at Candlestick Park waited in darkness for the power to return. The initial power outage of 25 minutes happened 25 minutes before kickoff.

The completely darkened stadium was without light for 20 minutes delaying the opening kickoff and leaving fans confused. It was reported that 1, that is just 1 emergency light, turned on in the far corner of the stadium although emergency lights did come on inside the sports stadium.

The cause is reported to have been a blown transformer just outside the stadium. Witnesses say that the lights went out in the parking lots about 2 minutes before the transformer blew up. The root cause is under investigation.

Power was restored with the use of backup generators. Early in the 2nd quarter the backup generators failed. Crews from the local utility company restored power about 15 minutes later. Candlestick Park was the only location affected by the loss of power.

Why Sports Franchises and Utility Companies Should Be Concerned

Monday Night Football (MNF) places the city it is broadcast from in the national spotlight. With no other competition, MNF provides an exceptional opportunity for cities to showcase their beauty, attractions and culture creating substantial tourism value.

A stadium or sports arena blackout can cause a lot of problems. 69,732 people in a small darkened area is a breeding ground for liability lawsuits should an injury occur. In addition to liability from accidents, if panic starts fans will start fires to see. A city could easily blacken its image (pun intended) as well as lose an entire historic stadium.

Preventing incidents like this from happening means making sure the utility companies are performing adequate inspections and preventive maintenance on aging assets. In this case, the utility company PG&E reported that they had done routine checks earlier in the day.

The question is, were utility maintenance crews just walking around or performing inspections using a CMMS system? If they were using a CMMS system to perform inspections, PG&E management would have been able to verify exactly what was done and by whom. The investigation would be concluded very quickly.

San Francisco is a playoff bound team who will be hosting a playoff game next month. Let us all hope that PG&E officials find the root cause of Monday night’s problem and can ensure that repeat does not happen.

On a side note, I feel for the city of San Francisco, In 1989, at the start of game 3 of the World Series, an earthquake happened. San Francisco is a beautiful city and I hope it can enjoy a major sporting event without interruption.