Comcast’s Restoration in Houston and Relief in Florida 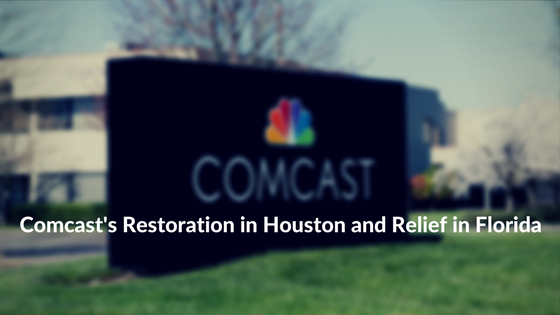 Hurricane Harvey made landfall in Houston August 25, 2017 and continues to flood parts of Texas. Some areas have seen over 40 inches in rainfall.

Houston is one of the biggest markets for Comcast Corp. with 500,000 subscribers to at least one of its products. Comcast suspended operations in Houston in the early days of the storm until local emergency management agencies announced that the streets were safe.

Comcast then announced on August 30th, 2017 that it had begun the assessment and restoration efforts in the region. That effort in the Greater Houston area includes Brazoria, Chambers, Galveston, Fort Bend, Harris, Liberty and Montgomery Counties.

The company said this phase will include an initial assessment of Comcast’s facilities, services and network so Comcast canaggressively implement its recovery plan throughout the region.

Two weeks after the devastation in Houston, Florida was hit this week by Hurricane Irma leaving over 7 million people without power and families are now dealing with the aftermath.

Comcast/Xfinity opened up 137,000 Xfinitiy WiFi hotspots throughout Florida so residents could stay connected for free during the storm. The hotspots are for anyone who needs them, including non-Xfinity customers, according to spokeswoman Mindy Kramer.

A map of Xfinity WiFi hotspots can be found at Xfinity

Non-customers will be able to renew their free sessions every two hours through September 15th, 2017.

Implementing a CMMS into your Cable Operations

Many of the utility power failures resulted from down power lines, cut power due to flooding concerns, failed generators, and other electrical grid problems. These types of storms are extremely destructive and in some cases can leave businesses without power for days or weeks.

The question is how can utilities be better prepared for natural disasters and how can they increase the speed at which power is restored? The answer is yes. One possible solution is to utility companies, able operations, and facilities to implement a CMMS system.

A CMMS helps to insure that utility asset managers have prepared for arriving storms as well increase the
speed and efficiency at which maintenance crews can fix problems. This is also true for cable operations when monitoring their inventory, asset life-cycles, and asset functionality. Our system, Transcendent, allows cable technicians the ability to mobilize in the field and maintain back-end inventory in the process.

CMMS solutions give utility maintenance managers the tools they need by collecting all asset detail such as location, condition and work history. This information is then used to quickly identify at risk assets which can then be scheduled for inspections and preventive maintenance before a storm arrives.

The time gained through mobile CMMS applications allows utility maintenance crews to accomplish more work with the same amount of resources. More importantly, the inspections process will also identify potential problems that could cause additional utility power failures such as leaning trees on power lines or substations at risk from flooding.

A CMMS solution could better assist facilities in many industries and benefit their customers on keeping them up to date on their home equipment, facility equipment, and also updating the customer faster on when issues are being addressed in natural disasters, like Hurricane Harvey and Hurricane Irma.

Mintek hopes all those affected by Hurricane Harvey and Hurricane Irma are safe and are finding relief during these hazardous times.