Charter Turns Down Verizon Buyout for over $100 Billion 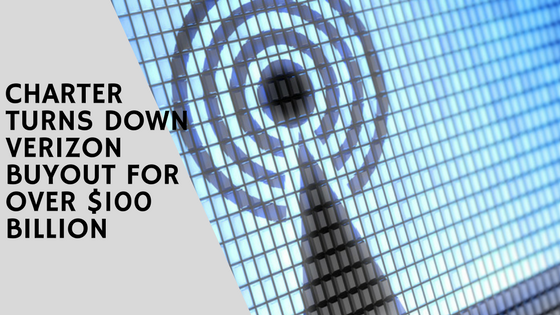 Connecticut-based Charter rejected the offer, valued at between $350 and $400 a share, as too low, and because the company — and Denver media tycoon John Malone, a Charter board member — weren’t ready to sell, sources told the New York Post.

Verizon has also expressed interest in Sirius SM Holdings as a buying opportunity.

Chairman and Founder of Douglas County-based Liberty Broadband Corp. the largest shareholder in Charter, says they want to give the cable company time to complete its integration of TWC. As we know, Charter acquired TWC last year for $78.7 billion and is still ramping up their partnership with them.

That deal, backed by Liberty, made Charter the second-largest U.S. cable TV company with 17 million subscribers. It also marked Malone’s return to the U.S. cable industry more than a decade after he sold TCI, then the biggest domestic cable company, to AT&T.

According to the Post, Verizon, which will close on its acquisition of Yahoo next month, is interested in acquiring a cable company such as Charter or Comcast to help it increase its scale in a consolidating industry.

Cable and Wireless Partnering Up

Cable and wireless industries are being driven together by consumer video-watching habits. Consumers are constantly on the go which means their content needs to be with them at all costs. If cable companies don’t accommodate to the customer, customers will go elsewhere to get content where and how they want… which today is wirelessly.

Cable and wireless industries are also being drawn together by the debut of 5G mobile networks designed to handle faster speeds per second, which gives customers their content faster and ability to choose where they gain their content.

Having a widespread fiber-optic network to help handle the expected explosion of video and smart-home data use is motivating companies to explore deals and partnerships.

Last month, Charter and Philadelphia-based Comcast Corp. agreed to jointly explore wireless technologies for a year. The fact makes nation’s No.1 and No.2 cable companies potential partners in wireless dealmaking.

If Charter is exploring, it’s almost a guarantee that other cable providers will be soon to follow or already are on their way.