Are cable companies playing nice with Netflix and Hulu? 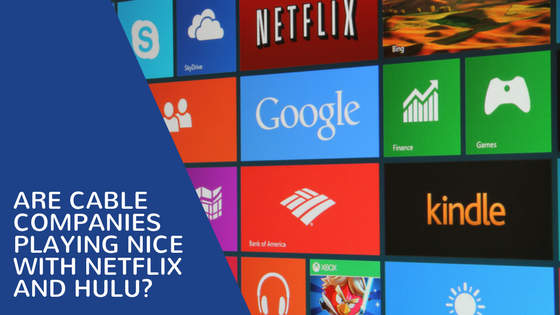 “If you can’t beat em, join em.” The philosophy holding true with two of the biggest cable operators in the U.S.- Comcast Corporation and Charter Communications Inc. These two are in talks to offer Hulu’s on-demand service through their set-top boxes.

Comcast already offers Netflix, YouTube, and Dish Network’s ‘Sling TV’ via its X1 service, which helps subscribers find shows and movies by voice-activated searching using their remote controls. The ability to give customers seamless access to Hulu’s catalog of movies and shows brings the company one step closer toward its goal of being a one-stop shop for their customers and their TV viewing needs.

During an industry conference back in September of 2017, Matt Strauss, a Comcast executive VP stated, That’s the biggest role of a distributor– how we’re able to offer all these choices on one platform. To a customer, these are just choices and you shouldn’t have to switch inputs or figure out how to get that choice.

This has been cable’s biggest feat is getting customer choices in one platform to enable retention and continue building upon the client’s requests for show types, movies, etc.

Charter also plans to add Netflix in a new user interface that integrates web video. Altice USA, the fourth largest U.S. cable provider, is also in talks with Netflix; they already feature YouTube videos and Pandora on its new Altice One cable system.

Pay-TV companies once viewed streaming services as threats to their business enabling users to watch popular TV shows on demand without paying for a cable or satellite subscription. Comcast has tried usage-based pricing, which charges internet customers extra if they stream over a certain amount.

Those early ideas have now been taking out of cable deals, but it allowed cable companies to realize their customers are going to watch content on many devices including TV’s, phones, tablets, computers, etc. really anything type of device that they can stream on they will watch on whether they originate from TV or internet.

Cable operators acknowledge that many of their subscribers already stream videos from Netflix, Amazon, and Hulu, so instead of burying their heads in the sand they are embracing the idea of watching TV in a non-traditional way and still making money off their clients by including these services in their plans.

Cable companies still make a profit off of their customers streaming because they use the TV companies’ high-speed internet services to do so.

By helping customers avoid the hassle of juggling remote controls or toggling applications, cable companies are hoping to appeal to their web-savvy customers. Comcast is also testing an app that lets subscribers access their cable service through Roku’s set-top boxes.

Netflix has struck deals with several telecommunications companies and pay-TV providers outside the U.S to put its shows and its service in front of more customers. Netflix already has more than 52 million customers in the U.S. and almost half of these households have a TV.

For Hulu, a home on Comcast or Charter’s on-demand menu would get its videos in front of more customers, and it would help Hulu tap into the $63 billion TV advertising market.

Comcast is one of the four media companies that owns Hulu, which sells an $8-a-month on-demand service with original shows and re-runs of older programs. Hulu also sells a live TV service with dozens of channels for $40; so far the talks between Comcast and Hulu don’t involve the live service.

It will be interesting to see if the partnerships will pan out, and if so, how well customers will react to the change. I think if the ease of the user is kept in mind, it will pan out for cable operators to keep their retention at a steady pace instead of customers jumping ship.