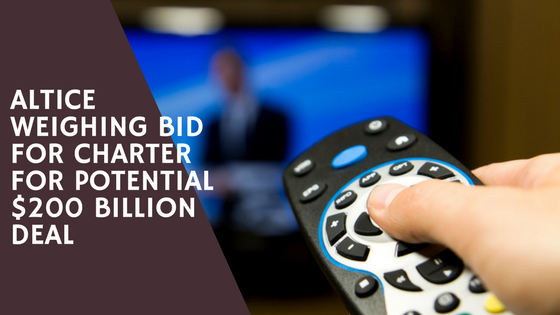 Altice can be added to the list of providers trying to figure out a way to buy Charter Communications.

According to a private source close to the situation, The French telecom giant and its U.S. cable subsidiary, Altice USA, are working on an offer to buy Charter, but haven’t brought a purchase proposal to Charter or its advisors. There is no confirmation that Altice will engage but the prospects seem likely it will happen.

Founder of Altice Patrick Drahi has had ambitions to expand into the U.S. and with a recent interest from SoftBank to acquire Charter, Drahi has decided to see if he can compete.

Altice has lawyers and bankers working on a bid for Charter. However like SoftBank, it faces significant hurdles in crafting a deal that would meet shareholders’ expectations on price while not being filled with the stock of the acquiring company, which in Altice’s case would be much smaller than Altice USA.

CNBC reported a few weeks back that SoftBank has been working on structuring its offer for Charter. It is clear though that SoftBank’s and Altice’s offers aren’t meeting the price objectives and structure of Charter’s management or its largest and most influential shareholder, Liberty Media; Liberty Media controls 20.5% of the company’s equity and 25% of its voting shares.

Altice has shown a unique ability to cut costs and generate substantially higher margins, before taxes and other costs than predecessor managements in the short time they have been operating in the U.S.

Liberty Media is still wary of taking Altice paper in the belief that it’s too early to tell whether those gains are sustainable.

Charter, with $60 billion in debt and an expected purchase price that could reach or exceed $500 a share would represent an enterprise value of almost $200 billion. While Altice operates at higher levels of leverage than Charter and would be expected to add two turns of leverage to the $16 billion in cash flow it receives Charter in the deal.

The one defining element that both SoftBank and Altice would need to consider is if either of these providers could bring in significant equity investments from outside parties to help fund their bids.

It is clear whether SoftBank or Altice make an offer that Charter is a desired property. In the last year, Verizon, SoftBank and Altice have spent considerable time seeking how they could buy out this property; the only company that hasn’t tried to buy Charter in the last year is Comcast.