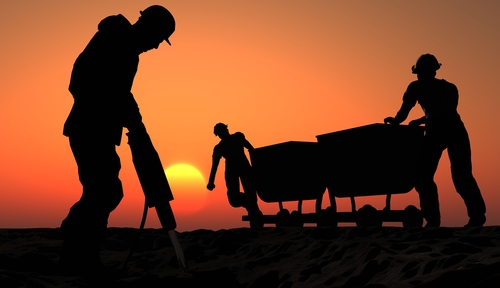 The toxic waste water that spilled from a gold mine in southern Colorado a week ago has brought to the surface a more menacing concern. With an estimated 55,000 abandoned hard-rock mines pockmarking a landscape across Colorado and other parts of the West, researchers say this could happen again.

The Gold King Mine flushed more than 3 million gallons of sludge into the rivers, creating a chemical-laden stew of arsenic, copper, lead and other contaminants. There are two other mines near the Gold King Mine that have been leaking for decades and must be cleaned up, otherwise another disaster is waiting to happen.

The spill occurred when the Environmental Protection Agency were plugging the leaks of the Red and Bonita Mines, and in order to accomplish that, the crews needed to make sure Gold King Mine was stabilized. While they were excavating loose material in the Gold King Mine it fell- creating a reaction which caused the tunnel to open and water sitting behind collapsed material to leak out into the Animas River. The sludge has now gone into parts of Utah and New Mexico.

The federal government has been under pressure to patch up the old mines to ensure the runoff isn’t contaminating America’s waterways. However, it isn’t guaranteed that once workers begin to plug the mines that another spill couldn’t happen.

There are currently 400 abandoned mines in the Silverton area, among an estimated 22,000 in Colorado. Most of them remain unexplored, and remediation for the most dangerous among them isn’t guaranteed.

Current residents resisted the EPA from designating local mines as a Superfund site; residents were concerned that by recognizing hazardous waste that would’ve turned off tourism to their area hurting the economy.

In the aftermath of this spill and the long-term effects on wildlife, a push is now being created to implement more Superfund sites in the West. The governor of Colorado has now made a pledge to re-assess the abandoned mines, so in places where problems seem to be rising they can catch them before it becomes serious.

Preventive Maintenance Can Make a Difference

The motto stands true until it happens to you. “If it isn’t broken, why fix it?” The short and long term effects that this mining incident could be causing to our water system and eco-system could’ve been prevented had a plan been in place; the city’s focus was on short-term loses instead of long-term problems. Preventive maintenance can help predict incidents like a collapse in an infrastructure from happening.

Below are some preventative maintenance steps that can be conducted and ways we can better assess and learn for future situations.

Maintenance practices are best utilized when put into an effective management system. Listed below are a several items to consider when implementing your strategy:

Through better maintenance and prevention practices, workers can document mine data allowing problems to be tended to before our eco-system and water system get affected.